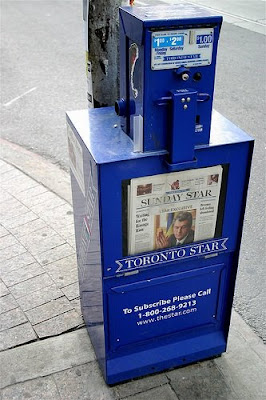 Finally, my friends, we arrived at the lie I told. You see, I never worked for all three major newspapers: the Star, the Sun, and the Globe and Mail. This isn’t a big whopper but the stories are fun so I decided to include in our game anyways.

First, I will tell you about how I sort of worked for the Toronto Sun. Or rather, how my brother worked for the Sun and I had to wake up early on Sundays to not get paid to help him. You see, my elder brother, BBA, got a job delivering the Sunday Sun to subscribers in two of the apartment buildings near my house.

The job required him to wake up at around 5:30 a.m., walk to the first building and put the papers together. After that, he had to walk through the floors of both buildings and fit the paper through the mail slots of the appropriate doors. He and I would split up the floors in order to get the job done more quickly. When we were done, we would drag ourselves home to wash the newsprint from our hands.

I’m still not sure how much he got paid for this task but I’m pretty sure that I was paid bupkis for helping. There were even occasional weeks when my mother and I would take over, although for the life of me I can’t think what BBA could have been doing at the crack of dawn on a Sunday morning that was more important than making a pittance delivering the Sunshine Girl to her devoted fans.

Many years after that brief foray into the publishing world, I returned home from university for the summer in desperate need of money. The job I had worked at my entire high school career wasn’t available and I was faced with perusing the want ads in the paper. That is how I was hired by the Globe and Mail to do their dirty work.

You see, I was a telemarketer. My even more shameful secret is that I was a damn good telemarketer. I rarely used the scripts we were given and yet always managed to close the sale without ever having to so much as stretch the truth let alone lie – I was the wunderkind of the telemarketing world. 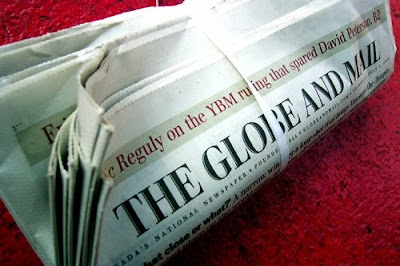 A week after starting, I was given the task of selling this “national” Toronto newspaper to the Ontario-hating Western provinces of Alberta and British Columbia. But even that challenge could not stop my evil talent and I made sale after sale.

I finally realized that I had taken my gift of the gab too far when I was pulled into my manager’s office and offered a promotion as a manager during the early morning hours. It was only my second week on the job.

Despite my need for money, I declined the job and quit the next day. Telemarketing is the lowest form of sales out there and I was the top seller in the room even on my off days. It was time to stop the insanity.

I am somewhat embarrassed to admit it but the Globe and Mail wasn’t even my last telemarketing job. I later took my skills and used them to cold call for charitable foundations, raising money for great organizations I sincerely believed in.

So there you have the truth behind my whopper. I’ve schlepped papers for the Sun, I bartered my soul for the Globe, but I have not yet worked for the Toronto Star. Although if they’re hiring travel writers, I’d be more than happy to change that status!
Posted by MsTypo at 11:11 PM

I can honestly say I have never known anyone who did telemarketing, not even virtually. Good for you for taking those skills and putting them to good work. I have always thought I could be good at that. . . for good or for bad. . . :)

As long as I sold something I truly believed in, I think I could do it. Today, we are inundated with people requesting money, that I feel sad for telemarketers. Shows you have a strong personality.

Now THAT is a true skill! I can't sell anything. I'm too afraid of being spat at. ;-) LOL!

Loved this tale - a satisfying end to a hilarious trilogy of lies and half-truths...

I am impressed - I would do so badly in such a profession; I can never sell anything to anyone.;)))
I am glad though that I got right which statement was false.;)))

Will think twice about all the telemarketers that call each week... before hanging up on them. Well done, to later use those skills for charity.

You also did other telemarketing during your life--but I won't share those secrets!
I think the Star should employ you at least as their travel blogger!
merthyrmum

Great. Don't you love brothers?
;)
And I wholeheartedly hated my sales job, blaeh :)

It isn't really telemarketing if it's for a good cause!

Have you ever considered writing an autobiography? Seriously. You have a life that is beyond fascinating, plus you are a fun story-teller. If you write it, I will buy it!

I used to cold call for the Red Cross for blood donors. One time this man was super rude to me. I thought I'd hung up and I said to my calling neighbor - "we don't want his blood anyway!". I hadn't hung up though. I kinda got in trouble. At least I was only 16 - but sadly would still probably say the same thing at 40. :)

I agree with your mom. You should offer the Star to write about your adventure in travel. Let them read your blog and I´m sure you´ll get the job!

You have so many wonderful life stories to tell! I'm with Kathy B on the book writing!

As a working journalist, it pains me to say that you had two of the most important jobs at a paper!

You tell the most interesting stories! You have experienced so much travelling the world and i look forward to each and every new story you have to share with us.

With the way that you write, this is really the one that should be true.

I have never done telemarketing. I despise getting on the phone. I even email my friends to plan get togethers :-)

How exactly did your brother con you and your mother into doing his work without sharing his "pittance?" I can clearly see that marketing skills run in your family!

I admit that I once had a job as a telemarketer. I was usually in the top 3 for sales (we tried to get people to resubscribe to their magazines), and never followed the script. That's why I thought it was weird I was always getting "yelled" at for not following their stupid script. I was making sales, so who cares?