On Friday, I asked you all to guess which two of my sneaky statements were true and, more importantly, which one was the lie. Rather than give away the answer today, I thought I would draw this out a wee bit by helping to narrow down the field.

One of the odder bits of truth from Friday’s post was option two: my husband and I met in a computer lab. Of course, that’s only the truth by the narrowest of margins since we were in computer labs in different cities. Heck we were even different countries.

One of the best-kept secrets in the history of Hubby and Typ0 is that we met on the Internet, in an IRC chatroom. We like to tell people that we “met through mutual friends” and that isn’t technically a lie since the people on our IRC channel were online friends whom both we knew.

Here, for those of you who asked is a brief take on the truth of the courtship of Typ0 and Hubby. Back then I was still Typo and Hubby was better known as echobelly. In January of 1995, the Internet was nothing like it is today. I don’t want to whitewash the past but the ‘net was a far more innocent place back then. Meeting people from online wasn’t dangerous like it is today. 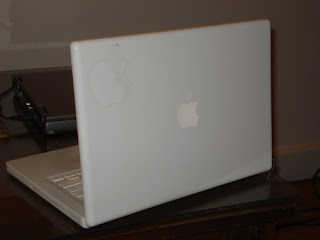 Our IRC channel was devoted to music but we were known to get up to all sorts of crazy high jinx. On January 10th of that year the “floofmobile” went crazy and those of us who were online had to “hide.” And that is how it all began. Echobelly sent me a /private message and I responded. Before I knew it, we were exchanging real names and regular emails. Before long, we started “talk”ing (another early days application). By the end of the school year, we had graduated to snail mail and talking on the phone.

This is where I get to admit how lame I am because during this entire time, I thought echobelly and I were simply good friends and that he had a crush on my friend, SGH. So when he invited himself to my parents’ house in Toronto, I didn’t think twice about including SGH in on all the fun.

My parents were oddly astute and cool about the whole thing. Echobelly stayed in our guestroom, which meant that I wouldn’t be rushing off to meet my strange Internet friend at his hotel. We were also incredibly well supervised… for the most part.

When I opened the door on August 25th I saw a tall, lanky guy on the other side and I thought, “He’s taller than I thought.” I’m still not sure what his first thoughts were. (Hubby Edit: I think it was, "She's shorter than I thought.") Within an hour, the amazing camaraderie we had developed online and over the phone had translated itself to real life and we were chatting like long lost friends.

By the end of the evening, I finally figured out that echobelly had a crush on me. Me! I’d had no idea and hadn’t even hoped for such a thing. SGH is hot and that must be who he wanted to crush on. Echobelly finally got it through my thick skull by kissing me on the ugly blue couch in the basement.

He pulled back from the kiss and asked if I was going to hit him. Umm.. No.

Check back in tomorrow when I narrow down the list yet again!
Posted by MsTypo at 10:50 PM

I knew that answer!
Ugly blue couch? Huh...
I bet the internet was dialup back then!
merthyrmum

LOL! That's a pretty awesome story. If I can share my two cents, I think it's way more interesting than 'we met through mutual friends'. ;-)

What an awesome story! sooooooooo sweet! :)

awwww!! :) Isn't the internet a blessing though?? Oh sure, it can let some creeps in, but it's a wonderful opportunity to meet new friends too. I've got internet buddies that have been with me through the births of my children, through multiple moves (inc. evacs), through the deaths of my parents, etc. The net is also a great way to keep in touch with old friends, and family, on a very regular basis. Facebook and MySpace are great for this... no idea what to write in a 'real' letter... well, then just send your sister a virtual 'flower' and she knows you're thinking of her. How sweet is that?! Congrats again you two :)

ps. I met my hubby in a food fight.

How sweet and romantic! Thanks for sharing this wonderful memory!

The adoption should be finalized soon! Then you can head on over for coffee cake anytime! :0)

Great story! I love hearing how couples met! Thanks for the sweet compliment on my work! Your world adventure is so cool! I've never been out of the US! Maybe one day...

Great story... and at a time when the Internet was still in its age of innocence no less.

This is a romantic and wonderful story; loved reading it as I can so identify with everything you write here. Looking forward to the revelation of the false statement.;)

It's a wonderful, romantic story and I don't think it matters where you meet, as long as there's true love.

Is it ok when I leave only "aaawwwwwwwww" as a comment today?
:D
What a wonderful, sweet story :D!

SO funny!!! Hubby and I met online too. I guess if it was meant to be it will find its way, right? Anyway, I'm so full of excitement late of days because I may be in Egypt this December! Want to meet? Ha ha! I'm really excited!

what a totally cool and modern love story! Much more interesting than 'we met through friends' or through work! I cant wait for tomorrow's post! Did you track down the arabian wet wipes yet? :-)

what a cute post you two are geeks to the heart.
Yay
Brittany
http://www.papermoonies.blogspot.com

I actually went back to see what i had answered. And I´m still in the running. Loved this story and hope the other 2 are just as interesting!
I think I´m going to do this someday...

I met my husband online too! The wonder of Internet...

I remember when the only thing there was to do online was the aol chat rooms!

I can't wait for the next story.

what a great story! hubs and I met online as well. it is far more common now but I remember not wanting to tell people the truth about how we met b/c they were all appalled that we met through a chat room.

Thats so sweet! I love these stories!

Funny thing is, I have so many friends that have met online, gotten married, and have been happy ever since. This is a great story.

What a wonderful sweet story, and what a fun way to share it!

So many couples who met online are unwilling to share their stories. Thank you for sharing yours!

that is so cute i am going to barf.

What a cute story! You know one of my bff's is getting married this summer and she always tells people they met through mutual friends. They didn't. They met on Napster, remember that illegal downloading music site! YUP...Love always finds a way :)

i always knew he liked you, but you wouldn't listen! i think you were just lying to yourself all that time! you two are so cute together, how could the story have ended any other way??