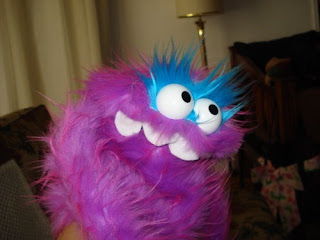 (To prove that I’m not always a Grumpy Gus as my more recent posts may have suggested, today for your reading pleasure, is the story of Ted, the puppet monster.)

Back in April when I was in Toronto, I attended the One of a Kind show with my parents. While there, I found the most adorable puppet for my young nephew.

I naturally tested the puppet’s voice and ability to groove at the stand before I handed over my money. The conversation I held with the puppet greatly scared the two men in charge of the stall although I think I amused my mother and the one or two people who had gathered around to see the crazy lady. 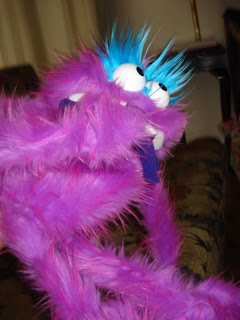 All the way home this purple monster and I bonded through conversations about the differences between Muppets and puppets and the state of the economy. We waved at cars going by and ignored my parent’s pained looks from the front seat.

By the time we arrived home, the monster and I had bonded. He begged to be allowed tot stay and travel the world with me and I found myself unable to deny his wish. Sadly this meant my poor nephew was denied a gift but since he’s still a baby I’m hoping he didn’t notice too much.

Ted the Monster enjoys his new home and spends countless hours watching television and enjoys avoiding my neighbor’s dog, Alex, who thinks he’s a chew toy.
Posted by MsTypo at 11:34 AM

I love Ted already! My son loves him too! I hope you day is a nice one!

I thought Alex did have a new chew toy? What is he bothering Ted for?
merthyrmum

Very adorable; he looks like Animal's estranged cousin. Although, he's a muppet & Ted's a puppet, sooooo . . .

Ted, All it took was one fleeting glance at your shimmering purple faux fur and I was smitten. Staring longingly through the world wide web at your smoldering bulbous eyes, I can see why you bonded so effortlessly with the woman who now calls you hers. But I say this to you amore, should you ever choose to wander the world with annother woman who enjoys off color opera, fine chocolate and freaking out innocent bystanders.. my hand.. no my whole arm, up to the crook of my elbow is yours for the taking. Muppet or Puppet, I care not! For you are my Darcy and I your weirdo of the blogosphere!

MAAAAAN I need this vacation!!!

how adorable!! i think i want a cuddle... LOL

Thats very cute. Sometimes I buy gifts and keep them too ;)

How cute. I love puppets. I have a huge box put up for grandkids one day!

Oh you brave woman you! I only have silent intellectual conversations with my hand puppets. Hahaha! :)

ROTFLMAO!!! Ted is fabulous, and the comments are great, too! You guys just made my day!

Hi Thanks for posting a comment at my blog. :)

And Ted is just so adorable and purple... How do you keep his teeth so white?

Lolz...Such a darling post about the kid inside every adult :)

& Thanks for your comments on my bog. Much appreciated!

I'll bet Ted's a very good traveler. And he's adorable, too! Does he have trouble at TSA checkpoints?

That is too funny! I love that you debated muppets vs. puppets:-)

He is too cute!

You have wonderful parents!!! LOL

Mine so would have told me to stop it. No sense of fun.

Funny, I have a silly dog puppet that I've used on every kid that's walked though my house. Each one has begged to take it home with them but I insist they have to visit the puppet (and me) at my house! It's a fun thing for them to look forward to when they visit. And your puppet, with those big happy eyes-- I wouldn't part with him either :-)
Thanks for sharing and thanks for visiting my blog . I'll be back again soon!