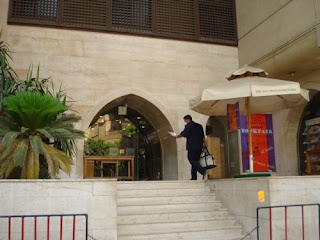 As some of you may be aware, we recently had several cases of Swine Flu diagnosed here in Cairo. Several of these positive tests arose in people living the Zamalek dorms of the one of the local universities. In the hours after the first cases were diagnosed, the university closed its doors for a week and locked the inhabitants of the dorm in a quarantine that would eventually last more than a week.

As you read this, the inmates residents of the dorms are preparing for what is scheduled to be their first day of freedom since those first two students were diagnosed early last week. Two of our friends, the newly named Quarantine Kids, have been going slightly stir crazy since this all began. As a consequence of the quarantine, they have missed out on a fabulous trip to Dahab that they had been looking forward to for ages.

But luckily for our poor heroes, they have great friends like Little One, Adelpha, and me! I mean, having three awesome (yet humble) ladies like ourselves as friends would be enough for anyone to count themselves fortunate, but in this case, we decided to go the extra mile and keep the inmates from going too batty.

Early last week, we put together the care package to end all care packages. There was booze, knitting, games, and even a copy of the Kama Sutra. We didn’t bother with silly things like food – we were more worried about their ability to make it through the week with their minds intact. 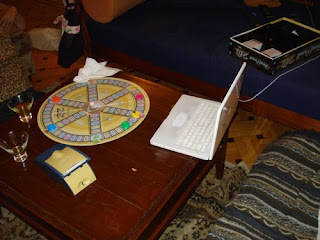 The three of us cabbed it to Zamalek and generously allowed Adelpha to carry the 50-pound bag everywhere. We approached on foot and all noted how quiet the normally busy road in front of the dorm was. Barriers were set in front of the stairs leading to the front door and several surgical mask-wearing officers lingered next to the building.

We were immediately told to step away from the dorms. We explained we were there to drop off a gift for friends staying inside. Since food (and care package) delivery was ongoing to the dorms, they thought nothing of this and called out to the man inside the front door.

The guard told us to "place the bag on the stairs and step away" in such a serious tone that I almost thought we were dropping off ransom for the release of the Kids. When I tried to take a photo of the goings-on, we were immediately rushed by the previously sleepy looking officers and told to stop. When Little One innocently asked why we couldn’t take photos, the response was silence.

Upon hearing we were there, the Quarantine Kids came downstairs and waved to us from their side of the large glass doors. After a great deal of screaming, waving, and jumping up and down on all of our parts, Mr. Kid came very close to mooning everyone but stopped for reasons I have yet to determine.

But the best part of the gift was yet to come! You see, I had included one of my many copies of Trivial Pursuit in the bag and later that evening we put it to good use. With the Quarantine Kids in Zamalek on their board, and the three of us in Garden City with my board, we played a game of Skype-assisted Trivial Pursuit for several hours.

Sure, we came nowhere near to finishing, and I forgot simple answers like “Niagara Falls” but a great and drunken time was had by all. The best part of our Swine Flu-free game was the simple fun of hanging out with good friends – even those separated by governments, guards, and the Nile’s waters.
Posted by MsTypo at 11:12 PM

Wow that is so crazy! I can't even imagine!

Gosh how frustrating and kinda scary for them!

But how cool is skype trivial pursuit :)

you are awesome friends!! and what a great idea, with the trivial pursuit!

The Quarantine Kids are TRULY gifted to have such friends. Kind, generous, beautiful and creative!!!

Some of the teachers of one the schools in our town were quarantined as well with Swine flu. When we heard about it, the administration stopped short from telling us that we shouldn't interact with any other foreigners. What a mess!

Wow - what wonderful, creative and humble friends the Q Kids have... Well done to you guys!

Typ0 and company, here to save the day! What a wonderful gift you gave those poor guys stuck in quarantine. Of course alcohol is the most important part of any care package!

That sounds like so much fun! I'll have to remember that someday...we have some friends that we don't see all the time, so doing something like that would be fun.

How sweet of you to make a care package! Quarantine would suck!

Stopping through SITS.....what a great idea for playing Trivial Pursuit! BTW I came by when I saw your giraffe photo. Come visit and you'll see why it caught my eye!

What a great story! I hope you're writing a book!?

how fun -we love game nights!!

Such a great idea. Definitely a keeper way to ensure that people use your gifts! Skype is amazing:)
merthyrmum

Darn - I guess that hasn't hit the news, has it?

At least you girls are resourceful. Simply awesome what you came up with! :D

Yikes! That sounds a bit drastic. But heck if you have an extra one of those care packages feel free to send it my way LOL

Oh my God. Serious much?

THAT is a great story! How wonderful of you ladies to do that for those kids. And how fun to play trivial pursuit via skype in the same town. The world might be crazy, but it gives us opportunities for fun!

You know, the Girl Scouts ought to have a badge to cover this sort of thing!

Oh my gosh! Ingenious! Skype board game play?!? Now why didn't I think of that! LOL!

visiting from SITS. Enjoyed reading your blog. I love reading what others are doing around the world. Blessings.

I had many nicknames as a kid, but never was I called 'quarantine kid'. Genius!

Booze is a definite must when in quarantine!

The Kama Sutra? Wow. It must have been an amazing night :)

That is one serious business! I hope all of them are okay now. There has been 5 deaths in Quebec.

We once played cards with friends on the phone (20 years ago) while under a curfew in Venezuela.