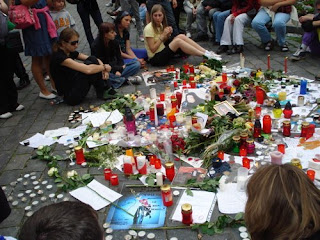 Today is a sad day all around: not only have I returned to Cairo from my amazing European adventures but it is also the day of Michael Jackson’s memorial service in Los Angeles. Since I am still working on posts to tell you about the places I saw and all the beer I drank, I thought I would instead stare this story from Prague.

Hubby and I learned about the King of Pop’s death while we were checking our email at a Mac Store in Zurich. “Holy crap! Did you see Michael Jackson died?!” I called over to his station incredulously. Several people in the store also commented about the shocking news and Hubby and I endeavored not to moonwalk as we made our way back to our hotel. 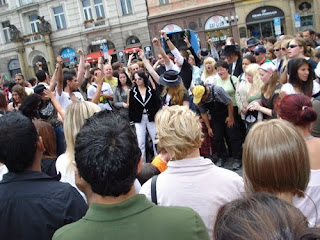 (Aside: Do the people who own Apple realize that the only reason people go into Apple Stores is to use the Internet for free? I’m a Mac baby and have rarely purchased anything at a brick and mortar Apple store. The Internet is for shopping and Mac Stores are for checking email. Is it just me?)

Anyways, two days later, we were in the Czech Republic walking through a really cool ped mall when we noticed a huge group of people gathered. Flash Mob? Dead body? We weren’t sure what was going on and no matter what we did we couldn’t get close enough to the epicenter of the circle to figure out it. Of course, the Michael Jackson impersonators and dozens of people wearing one single, sparkly glove probably should have tipped us off. 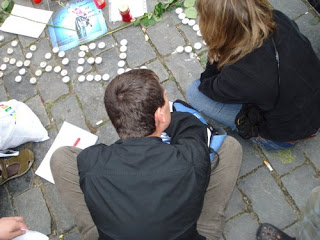 Two hours later, the group of mourners had grown exponentially and this time they had props. Someone had brought in a generator attached to giant speakers and was playing Jackson’s greatest (and not so greatest) hits on full blast. Children were dancing, couples were embracing as if only together could they hold back the tears, and several people had lit candles.

What amazed us was that most of the people we saw probably hadn’t even been born during Jackson’s heyday. They may have seen Thriller or heard the Dangerous album as teens but they weren’t there when the albums changed the face of music. I still remember watching the thirty-minute video on MuchMusic and dancing like a zombie in my living room. What connection did these kids have to him?

I suppose the King of Pop transcended generations and cultures. People in almost every country we visited were talking about his death and how tragic it was. They mourned the loss of the music icon. His dubious “Wacko Jacko” years and even sketchier child molestation trial were blips on the radar to these fans. They mourned him for the music he brought to their lives.
Posted by MsTypo at 8:14 AM

I'm not sure I know any of Wacko Jacko's "music" but it has certainly caused a world-wide furor!
I was more upset about Farrah Fawsett's and Ed McMahon's deaths. As well as several other famous peple who have died in the past three weeks.
merthyrmum

as for wacko jacko - sure some music WILL stand the test of time. But that might be because of a great producer in Quincy Jones, as well as MJ.

Certainly eccentric......but doubt he will be missed by most.

MJ is not fazing me.

The apple store rocks! They will answer any computer question that you have for FREE!!

I read something about beer?

Didja hear, Michael Jackson died? He's not coming back so let's just move on. Sheesh.....he was a freakin' entertainer. A good one, I admit, in his prime. I don't recall ever reading about any philanthropy.....I might have missed that. Seems like he mostly liked to spend his money on himself which I guess is okay.

Anyway, what about the rest of your trip?? THAT is interesting.

I always use Apple store for Internet...I don't even own a Mac:p

It's so sad that he died so suddenly. I was never a fan of MJ but I certainly liked some of his songs.

Michael Jackson's Thriller is brilliant - or at least, it defined my youth. Quite original too with the moonwalk. More than anything, he was a superb dancer.

The rest of his life was disturbing though - seemed to be such a sad lost soul.

I am quite surprised though by the huge grief his death has caused.. reminds me of the death of Princess Di.

I wonder if you were in Prague just shortly after I left.;))
Looking forward to hear about your trip.

You know...I have never been into an Apple store. But I am so contemplating throwing my Dell out the window and going back to a mac. Except for the price of a new photoshop program...

Anyway. MJ. I think his wacko persona is what is going to outlive what he contributed to the musical world. I am still mulling over his family's request that MJ's message be taken to the world. Ummmm...what message??

Apple Store rocks my world. Once you go Mac, you never go back...

RE: MJ, I celebrate the musician and the entertainer. Hopefully that will stand the test of time, not the tabloid headlines and the crazy behavior in his later years. But I still think it's cool that fans young and old are paying tribute to him around the world - cool pics of the fans there in the CR!

Can't wait for your trip report!

I really try to remember him for his "Early" years... the days of ABC & Thriller. Seeing his daughter speak at his memorial service today made me feel so sad for his children.

It is amazing the impact that Michael Jacksons death had, he was such an enigma.

On our local news, they compared his memorial to those of celebrities like Elvis and Babe Ruth. Funny thing is, even though they passed away years ago before the internet and all, hundreds of thousands of people mourned the same way. They had pictures and footage of the huge crowds of people at their funerals and memorials.

I remember being a young kid and listening to his music.

Ben likes to go to the apple store just to oogle at things.

MJ was a grat entertainer, but I think he led a tortured life.

Looking forward to hearing about your trip!

You're right. And in death, I hope he transcends his "Wacko Jacko" rep and is instead remembered for his amazing talents.

That's why I go into Apple stores! In fact, back in the day of visa runs to Japan, Korean expats all used to include the location of the Apple store in Osaka as part of the essential info for newbies doing the run!

I do wonder (like a lot of others) if his father and monumental childhood rise to fame didn't attribute to some of his odd behavior and perhaps depression at times. I agree with the speculation that he never got to just be a kid. I don't doubt that medication played a part in his death.

It is a very sad thing.

The passing of a troubled soul always saddens me.

And the Apple store?! All good. The people who work in there are technical gurus that have fixed all sorts of my silliness... Even though I don't have anything made by Apple!!

The Apple store...giggle giggle...Everytime we go there, that's all we see..people gettin' in on the freebie action! lol!

I was over the Jackson hype until I heard his young daughter speak at the funeral, then my heart broke.

And yes, I too wonder when Apple will figure out why their stores are always so mobbed :-)

It is interesting to see people in other countries mourning him so much. It has been quite a show.

So where are you?

Hope all is well.

This is so fascinating. Thank you for sharing!

i've tagged you for a meme, so do please come back!

Are you still on your trip? I realized how long my visit to your site is today given that the post re MJ's death is still first up. :)

As for your thoughts on the Apple store, I couldn't agree more. They are the white to my rice!

Hi, my new URL is: http://destinationdanmark.blogspot.com/

hi there. it's been a long time. sorry for my absence. I see you haven't posted in a while - all okay? MJ's death really didn't affect me as it seemed to hit so many others. I appreciate how amazing his (and Quincy Jones's) work was, but can't say I admire the way he lived his life.

Still this same post...I know he was very musically talented and very sick. But I am sick of this post!! Something new pretty please...with Vodka on top!

how can you be absent for THIS long? From the blogging community. I mean, I know you have a life and all that... but pity us blog stalkers, i mean, fans who need a little bit of excitement in our lives too, ya know?!

Haha... ah well. I am jealous. U must be having so much fun! :P Hope to hear from you very soon!

no more michael. we want the Wanderer back.

Hey girl! Hope you are doing well. We miss you!

Seems you have let your blog slip! Time to update or have you run out of things to say????

Where have you gone, dahhhhhling?

Where have you gone, dahhhhhling?