An Island of Neutrality 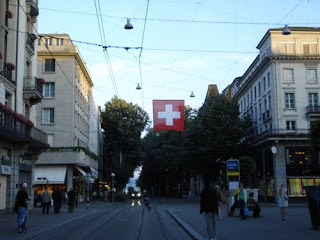 We left Vaduz with full stomachs and headed toward our next stop: Zurich. On our way, we saw innumerable picturesque farms and landscapes, and hills dotted with castles and ruins. Even the shacks and cottages seemed beautiful and perfectly situated. I wondered aloud more than once why anyone would leave this idyllic beauty to live in a soulless, grey city.

Of course, driving through the lovely Swiss countryside means driving through endless tunnels. The engineers of Switzerland have definitely perfected the art of the tunnel and like to practice every chance they can. We must have driven through no less than 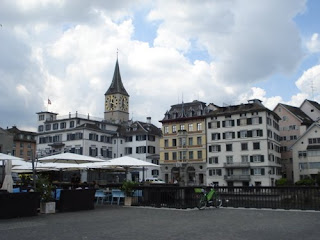 75 cumulative kilometers of tunnels just the first day. Of course, when you live in the middle of the Alps, I guess figuring out how to get around them or through them is a good skill to have.

At the end of our relaxing and tunnel-tastic drive was the city of Zurich. I can say without any hesitation that Zurich was a lovely city but definitely, and without a doubt, the most expensive city we visited during our two-week tour of Europe. That evening, I inadvertently ordered a $13 cocktail. Worse yet, I almost ordered a second before Hubby translated Swiss Francs into dollars for me. Don’t even get me started on how much I spent on the orgasmic chocolates and madelines I bought to eat in the car. 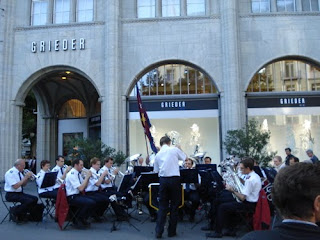 Hubby did manage to find one pastime that wasn’t too expensive – wandering around Zurich’s Red Light district and taking photos of the advertisements on the wall. Of course, when I wasn’t hiding behind posts and pretending not to be with him, I may or may not have been egging him on.

Gripes about the price of everything from a glass of wine with dinner to the to-die-for chocolate sorbet we had for dessert aside, Zurich was great. We wandered around the large pedestrian mall area (Why don’t more American cities have these?), stopped for a concert courtesy of the Salvation Army, practiced our French with 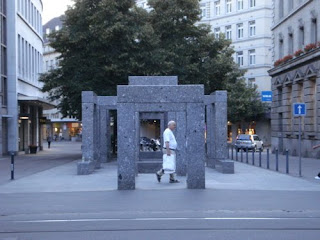 puzzled locals in this German speaking city, and even found a then yet-to-be-released paperback by one of my favourite authors at a local bookshop.

The next stop on our whirlwind tour of central Europe was Munich, Germany. Sadly, we didn’t find Munich to be very interesting for the most part. Admittedly, due to the poor weather shortly after we arrived in Germany we arrived later than planned and didn’t get to do our normal walking tour of the city. (Hubby Edit: It was only the weather’s fault??) (Typ0 Edit: I know you’re not trying to malign my Map Girl skills! *glare*) 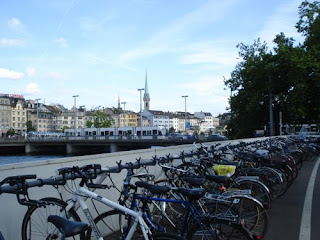 While a chance to explore this city in more depth would have been interesting, we did get an unexpected opportunity to visit one area of town.

Next time you’re in Munich and you’d like to know how to find the Red Light district, call me – I’m very familiar with it. As luck would have it, our hotel was a mere three blocks from the middle of the Munich’s “naughty area” and while the walk from our hotel to dinner was amusing, the walk back was an education I’m not likely to forget anytime soon.

Two Red Light districts in as many days, what more could a girl want from a European adventure?!
Posted by MsTypo at 11:56 PM

"Two Red Light districts in as many days, what more could a girl want from a European adventure?!"

I rode through Amsterdam on a bicycle, right behind my husband, all through the red light district. I can understand.

I have heard Zurich is very expensive - all of Switzerland. I'd still like to go.

diamonds? although i guess you could get them anywhere...

Yikes - two red light district areas... There is more to Europe than just that.. er.. I think...

The closest I've been to Zurich is the airport. But it was very picturesque! (The Alps and all that, could leave the airport since they stole my luggage and threatened to blow it up. Damn Swiss.)

I LOVE pedestrian areas. It's almost overwhelming all the things you'll find....

And "they" are so proud of their red light districts too! When my husband visited Germany many years ago, my BIL took him there for "sightseeing"!!

I love Zurich and have visited it many times, as my very good and long time friend lives there. Furthermore, my sister lives in Lausanne.
I agree with you fully, Switzerland is very expensive, most likely the most expensive country in Europe.
xo

amazing, I am just happy that I discovered with your lovely (step in from sits in my tuscany) your fantastic blog...! I travelled several times around the world, for many years and I am looking forward to enjoy your writings!!!
have a great day! ciao elvira

I agree with you about wanting more pedestrian mall types in America; love it when I don't have to worry about being run over while shopping.

Are you going to add the red light district in Amsterdam to your itineary?

Could you imagine the chaos if Yonge Street was made into a (permanent) pedestrian mall? !! Although it would be nice...
merthyrmum

I was an "accidental redlight district tourist" in Hamburg many years ago. Enlightening, to say the least!

Well, one reason not more American cities have shopping streets like that: Americans would have to be outside.
Outside? Walking? No way ;)

Red Light districts can be fun, but I guess that running into two in a row might take the fun out of it a bit ;)

I am loving traveling along vicariously with you on your trip. If Zurich is the most expensive - what cities/ countires are the most affordable?

Not only would I have been egging him on, I would have been dramatically posing in front of the ads!

I remember the tunnels - soooo many tunnels! ;)

Hmmm, I'm wondering, what exactly was the education you learned on your way back!

Came over from Pseudo. Great post! Having never been out of the US, I love these virtual travels abroad.

Okay, I know everyone is going to drop their jaws in disbelief and wonder if I've been living in a cave somewhere but I don't think I've ever heard of the Red Light district. I went to Google it.

It's like the 4:20 thing. I think I was the last person on the planet to know what that meant.

I loved Munich! The beer and the food...yummy! There's also a lot of fun places to visit...you should go back next time :)

I am one of those people who left Switzerland!! Ha ha ha, I lived there for almost 8 years. It is a great place to live,but the anal retentiveness can get a bit annoying and also it is very expensive, but as long as you are working/earning there it is ok. My first week in Switzerland I got bitched out by the neighbor in the building for putting my trash out on the wrong day and also not putting it into the special Zuri-sac- a 5 USD garbage bag that also serves as the garbage tax. I came from Span befor ethat and I was in serious culture shock!! I love hearing about your travels!!

LMAO.
You guys are fighting via blog edits. Classic. Love the oh-so-subtle jabs about Dr. Cheapo and wine and dessert costs. LOL. Ahhh my little HCH.

I am surprised Hubby didn’t get a five finger SLAP for taking photos in the red light district and noooooo I can never imagine you egging him on.