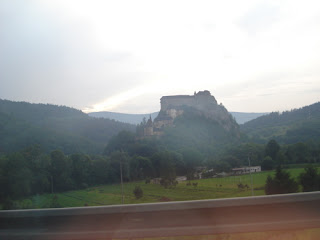 By the time we arrived in Bratislava, the slight sniffle I developed on our way to Krakow had turned into a full-blown cold and desire to be in my own bed. Much of the inspiration for this vacation came from the movie Eurotrip, so despite a cough that had people thinking I was a crack addict, I was incredibly excited to visit Bratislava. I knew it wouldn’t really be like the punch line of a city in the movie but for us it would be the culmination of three weeks of movie quotes and jokes.

The drive there officially made Slovakia the most castle-rific country in Europe. I 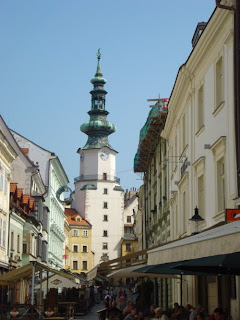 seriously lost count of the number of castles and castle ruins we spotted between the small town we stayed the previous night and Bratislava. I’d hate to be the only loser on the block in the olden days who couldn’t afford a castle in this country.

Bratislava naturally came equipped with its own castle situated near the pedestrian mall where we spent much of the little time we had in town. We wandered in and out of chemist shops in search of medicine to stop my cough and through touristy shops looking for cheesy fridge magnets.

As our time in Bratislava drew to a close, so too did our European adventure. We had had a fabulous time wandering the roads and cities and cultures of eight countries. I 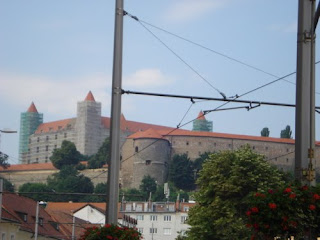 realize that we didn’t make more than a dent into truly discovering any of the places we visited. Nonetheless, in most places we tried to discover local haunts and try local delicacies, and made an effort to at least peripherally visit the cities in which we stayed.

Our European adventure definitely ranks as one of our best trips ever. Sure, we fought along the way, got lost along the way, and even probably should have received a traffic ticket or three along the way but we had a great time. When we returned the rental car to the airport in Vienna, we made an easy promise to one another: Map Girl and Clutch Boy will definitely be making a return trip to the rainy, castle filled, dream inspiring continent of Europe.
Posted by MsTypo at 12:11 AM

Love it! I'm a world traveler at heart, but so far my travels are limited to just what I can fit into our family life and budget. I did just enjoy a week in Paris last month, so I'm not complaining...

Visiting from SITS. Have a lovely day!

This does sound like a wonderful adventure! I am glad you got to go together and enjoy the sights. Now that our kids our big enough to actually enjoy such touring, I would like to spend some R&R time taking them places like this.

I love traveling.
That one is fantastic!
Have a lovely day from start to finish.
hugs hugs

I am so glad that you guys loved Europe :)!

I am sorry to see the trip end:-( I really enjoyed going along for the ride:-)

What a fantastic job of taking us along with you, Map Girl, and your hubby, Clutch Boy, on your long journey through Europe! I thoroughly enjoyed this trip!

I often want to travel places because of movies I have seen. I hope you did quote the movie a ton of times!

Did you get the fridge magnet?
What a fantastic trip you both had!!
Are we going to hear about the rest of your summer (and Autumn/Fall)??
merthyrmum

Funny how I'm from Europe, but have not done such a trip since my parents took me around Europe, by car, when I was a teenager. I guess it's time to explore that part of the world again, instead of all the tropical areas I seem to visit. Thanks for the photos and great writing.

Can we trade places? Map Girl and Clutch boy watch the kids, while Tired Parents visit the castle!

Just think about it!

Visiting your blog is always full of excitement! I love it!

I'd like to know how I get myself into your luggage. It doesn't even have to be the carry on. I've got a parka and can hold my breath pretty long. I have a serious travel bug but having 4 kids sort of puts a damper on that. Italy was great last year, living in Spain I loved.. but I never made it to places like this and I really wish I had. Can I come to your house? I've always wanted to see the valley of the kings but I'm a bit of wuse.. ha ha

Yes, you had one fantastic adventure!

Ooh, can't wait till next summer when we get to do this. 'Cept it'll be "German style". All things German. 2-3 weeks there while my parents watch the kids! *woot* I'll definitely be asking you for road trip tips!

I travel vicariously through you. Ah, the places I'd like to see.

Hope you link it up tomorrow on Travel Thursday!

Sad to see your trip end. Probably not as sad as you though! LOL

I traveled a bit with my parents when I was younger and didn't appreciate it nearly as much as I should've. I wish that I could do more of it now that I'm an adult but I don't have the resources, sadly.

That's ok, I get to live vicariously through people like you who are kind enough to share their experiences and pictures! Thank you!!!

What does it say that each and every time I visit your site I begin drooling over the absolutely fabulous places that you visit?

Wanna trade lifestyles? Even for a week? :)

You should make a scrapbook of this and treasure it forever.

Your accounts have made me start thinking about booking a European junket. The trouble is, I have to travel in the summer, and I'm wary of the American tourists...Bermuda shorts, black socks, and all that entails!

This is why I love the internet so much. What a great trip!

Gosh, the castles are so cool.

I am so planning to also go back, someday, one day.

Fantastic trip you had! And there's more to see! Try Holland next time ;-)

Glad you enjoyed your trip. Plenty of amazing things to see here, that is for sure. You have given me some new trip ideas!

What an adventure! Lovin' your blog!!