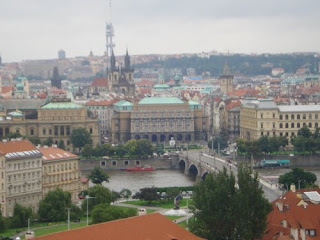 One of my favorite things about the city of Prague is that it is, quite simply, beautiful to look at. When we stood upon the ramparts of Prague Castle and looked out, there were beautiful old buildings in almost every direction. People who truly loved architecture obviously helped shape this city. 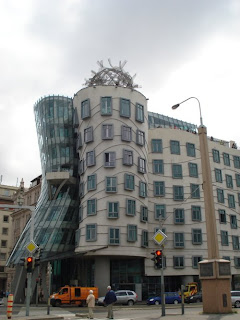 Of course, not everything can be perfect, even in Prague. The Dancing House was completed in 1996 and remains, in my opinion, a complete and utter eyesore. I realize that modern architecture has its place in the world and that the old must always make way for the new. Heck, before I saw it in its natural setting, I used to wonder why people complained about this rather cool looking building. The Dancing House simply doesn’t fit in with its neighbours and consequently sticks out like a sore thumb. 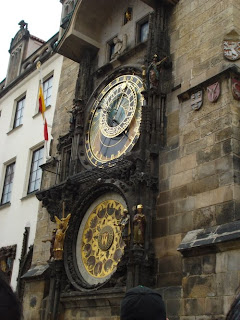 Shortly after we discovered the Michael Jackson memorial in the Old Town Square, we happened upon a famous Czech landmark: the Prague Astronomical Clock. The clock dates back to the 1400’s and has components that track everything from the time, the date, the position of the sun and moon, and it even provides its own floor show. The Swiss get a lot of credit for their watches but this clock is truly impressive. 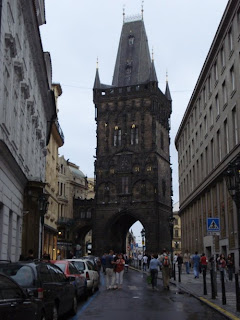 We walked around and through Powder Tower in Old Town Prague both sober and drunk. In the 17th century it was used to store gunpowder, hence the name, and its darkened brick façade still looks like it was part of a recent fire. 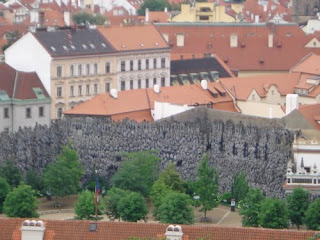 We never got a close-up view of the dripstone wall known as “The Grotto.” The wall is made of artificial rock and is part of the gardens built by Albrecht of Wallenstein. Had we obtained a better view, we would have seen carvings of grotesque faces and animals like snakes and frogs. On second thought, maybe it’s just as well we never got any closer.
Posted by MsTypo at 12:09 AM

I used to work out to a Claudia Schiffer(sp?)exercise video that was filmed in Prague. I have been in awe since then.

That modern building is funky but I see your point. I can see where it would not look right along side all of the beautiful historic architecture.

prague is definitely a place i would love to visit someday. great pictures!

I LOVE the clock! That is simple awe-inspiring. However, I am not fond of the modern building. Looks like someone rolled up one end like a newspaper, then squished it. Buildings should not be squished on purpose.

Your pics show me again, why :D

How old is that dripstone wall? From the view you got, it already looks a bit creepy... and the clock? That clock is GORGEOUS! Wow.

wow!what awesome pics, Prague looks like it should be on my list of 100 things to do, pretty cool!

I think the Powder Tower looks so cool! And rhyming names always have teh awesome.

I've been in Prague a long time ago.... actually for not a long time..not enough to see too much!
I'd love to go back one day!

thanks for stopping in TUSCANY...
have a great day! elvira

I really must put Prague on my list of places to visit...

Thank you again for a lovely walk down my memory lane.;) I agree on the beauty of this golden city with hundred spires.;)
You know, I was in Prague for 10 days in June, probably just shortly before you.;) I have also posts dedicated to the city, if you ever have time to read them, you might enjoy it.;)
xoxo

Such beauty to behold in all of that architecture. I could walk around for weeks admiring everything.

That building looks like it is about to fall down! I can see why people don't like it!

Ohhhhhhhhhh, that building is ugly. Sometimes I don't get modern art.

I love your photos!

These old cities should have covenants that prevent the building of modern, glassy structures that are always eyesores.

Thanks for the photos! It was nice to see. Unfortunately I lost all mine because my camera was stolen from my very nice hotel room: I forgot to pick it up from the chair where I had dropped it and take it with me when we went out. My own fault. So later I got a better camera ;)

Other than that I had a fabulous time and Prague is gorgeous. Do wish I had my photos...

I love that clock--and the other pictures of the old city. Definitely a place to add to the bucket list!
merthyrmum

Im glad I fond your blog! We're taking a trip there in a few weeks!! :D

You go on the coolest adventures!

The Powder Tower sounds inviting. Dripstone wall? I think I would have been able to get over the heebie-jeebies enough to admire it for what it is.

I'm enjoying this tour of Prague along with all of the pictures. I like your commentary on the dancing house, I can imagine it would be an eyesore in the context of the rest of the buildings.

Oh wow - these pictures are gorgeous! The Dancing House is, um, interesting. :)

Someday I'll get to Prague. Your photos are beautiful, thanks for sharing.