They Are Building it Now 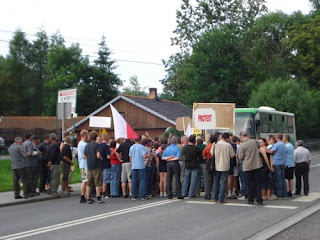 When we began our adventure back in Austria, Hubby and I marveled at the state of the roads in Europe. Between highways that could have been seamlessly transported to the States and well maintained country roads, we made great time on our odyssey and really had zero complaints other than the cost of petrol. Then we crossed the border into Poland.

During our time in Poland we found exactly one highway and unlike most countries that simply charged us a fee for a “toll sticker,” we were privileged enough to wait in a traffic jam for 45 minutes outside Krakow to pay our toll in cash. Of course, that was once we found the highway.

My Map Girl skills are not flawless but they are pretty darned good. Despite my best attempts to find a route into the city that wouldn’t take 10 hours, we found ourselves on horrible country roads for 95% of the time in Poland. Country roads that either needed construction crews to fix them or worse, country roads that were closed because they were being fixed. Single lanes of traffic were the bane of our existence for endless hours in Poland. And by single lanes I’m not talking about one lane each way – I’m talking about a single lane that each direction had to take turns using. 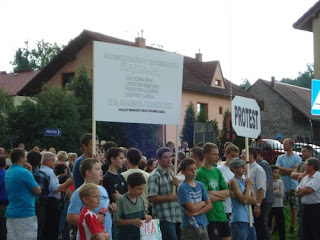 That sound you hear is me still banging my head against the dashboard.

The highlight of these endless driving tortures was the protest we found in a small village not too far from Krakow. The townspeople were angry about the narrow road in their village and wanted someone to widen the road and make traffic flow more quickly through their environs. So naturally they chose to block traffic for several hours to demonstrate their pique.

Of all the countries we drove through, Poland definitely had the worst roads. It also narrowly won the prize for worst signage. More than once, I had to redesign our route because either our map was out of date (January 2009) or someone had deliberately mislabeled roads in an effort to drive tourists mad. The Polish department in charge of road works will be happy to hear that they have at least two tourists who love their country and want to return but will never, ever try to drive there again.
Posted by MsTypo at 12:23 AM

I love them blocking the road in protest of their too narrow road.

Imagine, I have never been to Poland, although I was born in the mountains on the Slovak-Polish border.;) Asa child, I often looked into Poland from across the river that separated us.;)
I admire you that you venture into driving there, I have heard similar stories about the impossible roads from others.;)
xo

And I thought Cairo was frustrating! I never did go around and spray paint names on all the road before we left Maadi - ran out of time.

Imagine the poor Poles who have to use these roads every day! ... If they can find them, that is! ;-)

Huh...I always learn something new when I come here:-)

Protest pictures are so good. I have never been to Poland but its good to learn from a fellow traveller the conditions...

I love to drive "back roads" so that I can really see a place; too bad you had such an awful experience on Poland's roads. Also love that the locals are protesting... do you think they'll get some place with their protests?

From your story it looks like Poland is taking its time to "catch up." Since they're in the EU, I wonder if they couldn't find a way to get EU money to fix those roads.

Sorry, but I can't help but snicker at you "banging your head."

When you eventually drive in Ireland, you will meet the narrow one-lane roads again--unless the EU widened them recently!
They are a living nightmare!
merthyrmum

Ah, protesting. It reminds me of home... ;-) I do hope it'll bring some attention to their plight. ADD A LANE, MAN! For goodness sake! LOL!

... So how long did you have to sit in traffic?

Found you through SITS and I love your blog!

I loved Poland - the people were so nice - but I never had to drive there! :)

That's so interesting that roads are different in every country.

My "Map Girl" skills are VERY flawed! It drives the hubs crazy!

Oh gosh really? And one thinks it is Europe (ok old communist Europe), it should be better than Africa. At present we are in a fury of road widenings and improvements for the 2010 soccer world cup and it is driving us all dilly - but the end result will be wonderful. (or so the one or two completed projects foretells)