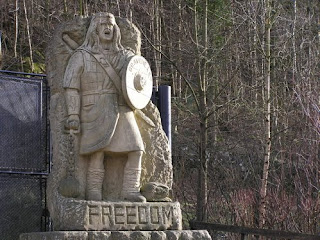 This week’s Saturday Escape is the reason I am now incapable of watching movies at the theatre and why I have my computer within reaching distance whenever I watch television. IMDB is one of the single greatest websites on the Internet bar none. I don’t think I’ve gone more than a day or two at a time without looking something up on this site and marveling at incredible information to be found in this one place.

The Internet Movie Database is the answer to every question you have ever had about that guy who was run over in the opening sequence of your favourite movie or show. From, “Isn’t that the guy from Eight is Enough?” to, “This actress is really talented. I wonder what else she’s been in.” IMDB knows why the folks at Police Academy seem to be defending the city of Toronto when they claim to be in the States and that there are 43 churches in Sunnydale where Buffy Summers lives. Whoever came up with the idea for the Internet Movie Database needs a Nobel Prize or knighthood or something to acknowledge the brilliance of this time sucking website.

I took today’s photo in February of 2005 during a brief trip to Scotland. The Wallace Monument is at the top of a long and winding hill. This Mel Gibson, Braveheart eyesore statue sits at the base of that hill and isn’t very popular with the locals. To be fair, the torturous walk up that hill, fighting the brisk Scottish winds wasn’t very popular with me either.

IMDB is this week’s Saturday Escape.
Posted by MsTypo at 11:55 PM

LOVE. THAT. WEBSITE. Wikipedia is a close second for me! ;)

I love your Saturday posts as I am always looking forward to the new websites you post about.;)
How extraordinary that soon I am about to watch (again) Braveheart, a DVD I purchased this week with the Irishman.
Have a great Saturday.;)
xoxo

I had no idea, that website IS a good idea!

I love IMDB. And you're right, that is a frightful statue of Mel Gibson.

I had no idea. will be checking this out. Sounds interesting.

Braveheart...one of the best flicks ever, huh? Happy Halloween, galfriend!

One Quarter to Go 'Til Halftime

My husband will love this little tidbit. . . but he might drive me crazy with movie trivia ;)

Haven't been to IMDB in awhile. It really is a fun website. I'll have to check it out again.

I love that site too. Anything I need to know, it has the answer.

Hey, would you like for us to swap blog links, I mean affiliate? Let me know when you add me. http://deedee1whoa.blogspot.com/
Also, please follow me over Google because I'm already following your blog. Thanks!

I am still giggling over the "This is why you are fat" website. But...imdb...it's a wonderful resource. Mostly for "where have I seen that person before" sets of insatiable curiosity!

Lovely site, I know. The hubster is always upset about Mel Gibson as apparently the real thing (Wallace I mean) was a huge man - tall and strong and Mel is, well, tiny.

OK, that statue sure as heck is not worth a visit ;)

Over here it's just too bad. I have not found one...uhm...special DVD seller....
So, we don't have a DVD player yet and just live with TV.
I don't watch TV anyway, only movies from time to time :)

I use that website ALL. THE. TIME. In fact, today I just looked up that little girl from the movie Curly Sue. In case you didn't know, she's pretty good friends with Adam Lambert (American Idol runner up).