Indiana Typ0 and the Walk of Doom 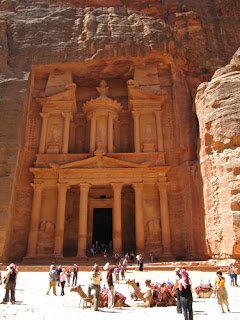 The edifice before was literally hewn from the mountain. If Michelangelo had messed up his masterpiece “David” no one would have known if he started over using a second block of marble. You can’t really start over when you carve a building out of a mountain. The sheer scale of Al Khazneh combined with the fact that it isn’t merely sitting on, near, or against the hill but is actually a physical part of it makes it truly unique.

At 43 meters high, Petra’s great Treasury is truly an amazing sight to behold. Despite what Indiana Jones would have you believe, there is only one relatively small room beyond the doorway. That, however, in no way diminishes from the building’s exceptional majesty.

Although most people come all the way to Petra simply to see the Treasury, they soon 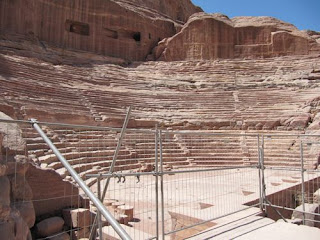 discover that this valley has much more to offer its guests. An entire civilization lived, died, and was buried here.

A short walk from the Treasury is a small amphitheatre. Unfortunately we were unable to walk around this structure as it was blocked off with a metal fence. One of the things that amused me most about the amphitheatre was the sight of open tombs along the perimeter of the highest seats. My first instinct when I saw the rectangular holes was that these were the earliest luxury box seats. “For the ghosts perhaps,” Hubby replied with a withering look. 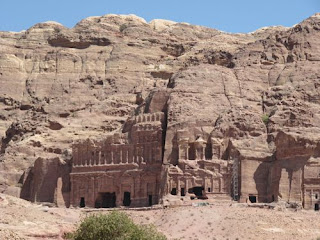 As someone who may or may not have complained about the amount of walking involved in this trip, I have to admire the people who built this area. They didn’t content themselves with carving beautiful buildings at the base of mountains -- they also went vertical. A short walk up the mountain, Hubby found several more cool buildings to admire. I say he found because at a certain point I knew we still had miles of horizontal walking to do and I was not adding walks up uneven stairs and sandy hills to those miles. (I’m inherently lazy; sue me.)

The quality of the stone in this valley is truly amazing. In some places it looked like boring grey stone. Mere feet away the grey gave way to browns, oranges, reds, 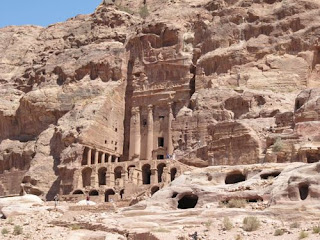 and pinks making the stone seem alive and lit from within. This must have been one of the aspects that first drew people and artisans to this area.

Rest assured that the people who created these dwellings, tombs, and other assorted buildings were definitely artists. In addition to the small details etched into the rock that can only be seen close up, the facades also look incredible from a distance. (No Hubby I’m not just saying that because I didn’t walk all the way to see the Urn Tomb up close.) I was amazed at how often the natural aspects of the stone were used to enhance the manmade structures. So much so that I wondered more than once if what I saw was Mother Nature or Nabataean workmanship. 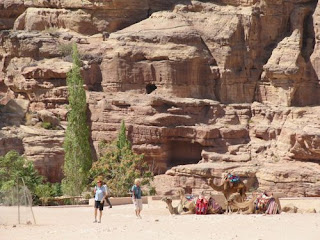 We walked for miles that day, heedless of the Jordanian sun beating down upon us. There was literally something new to see around virtually ever corner. Although we didn’t make it all the way to the Monastery (as featured in Transformers 2) at the other end of the valley we didn’t feel let down at all. We had followed in Indiana Jones’ footsteps and found far more than the Holy Grail – we found illumination.
Posted by MsTypo at 10:39 PM

And what a phenomenal place is Petra. I visited in February and would go back again....and again...and again. There is always something new to see around every corner and in every stone or crevice. The Nabatean civilization must have been incredible.
merthyrmum

My mom has a job offer that will take her to Oman for several months. I'm hoping she gets to go visit Jordan while she's there, although it's pretty far across Saudi Arabia. Is it difficult to travel in and out of the countries there?

I am so amazed by your photos and the stories of your journey. My son so badly wants to and travel this part of the world...I am not a traveler. Thankfully he is only 8 so I have time to work on my travel issues.

Wow, it sounds like a stunning walk. I will have to find a way to visit someday.

As I read this, chills were running down my spine... wow...
I feel that this place made an impression on you. The photographs are stunning, but I bet they can not adequately convey the sensation of actually standing there. I too marvel over the exceptional skill with which this place was created. Now I really long to see it...
Always a pleasure to stop by here.;) Have a lovely Friday,
xo
Zuzana

I sorely need some illumination! I must go to Petra to seek it.

Fabulous post with breath-taking photos. Gosh, those Jordanians were clever!

Oh I have read so much about Petra - I would love to visit it some day. In the meantime, thanks for this.

I have a horizontal limiter, too. After a while, I just will refuse to go up any more stairs. The pictures are absolutely lovely, how lucky you were to go there!

WOW TypO that is amazing. Great photos, and walk.
Have a great safe Friday!
hugs hugs

That just looks absolutely amazing. What a fun adventure!

It is absolutely amazing what was accomplished before computers were invented!

What a majestic place...a must visit historical place. Too bad I will never make it there.

wow, thanks for sharing your trip!
I feel like being there with you, again!
Happy Friday! :)
ps. shopping or no shopping today?

Thank you for sharing your amazing pictures and experiences. I will never get to see these places but I feel like I've been because I've seen them through your eyes!

Love all the pics and info, I'm so glad that you can take me around the world:)

Wow, what an experience. I feel that there are no adequate words to describe this place, but did a marvelous job. Thank you so much.

You mean you didn't do the death march up to the Monastery? Actually, considering I climbed Mt Sinai twice in 3 weeks, maybe it wasn't that bad after all. ;)

I loved Petra and would definitely go again, and again.