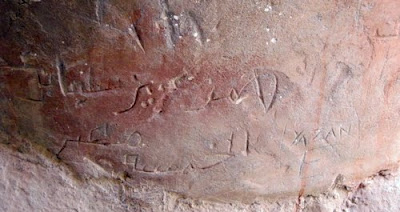 Although the Treasury dates back to the first century BC, Petra was only recently “discovered” in 1812. For this reason, it stands apart from many of the ancient sites we’ve seen in the region. Some of you may remember my photos of carved graffiti during my Nile cruise in January. In some places along the Nile, it was evident that there were professionals assisting those who wanted to leave their names in stone.

Here in Petra, there was far less graffiti to be found. What I found most interesting about the graffiti we did find was the language: the carved names were signed in Arabic rather than Latin letters. This may be due to Petra’s more recent “discovery” when contrasted with the pyramids, which have been tourist draws for centuries. I think it is also due to Petra only becoming famous due to Hollywood movies more recently than the sites in Egypt.
Posted by MsTypo at 12:33 AM

hahaaaa, a very clever title!
I didn't know his name - had to check from wiki!
Thanks!
Have a great day in Oslo! :)

I was AMAZED by all the graffiti in Egypt. And it's weird to think the graffiti can have historical significance, too, especially hundreds of years later.

I´m glad this place is not as exploited as Egypt. Yet.

This ia a great pictorial tour and info post. Thanks for sharing.
lots of love and
hugs hugs

This is indeed an unusual type of graffiti.
You have really seen the most unusual places in the world.
xo

I would hate to think that, one hundred years from now, the graffiti here in our town was something that people would talk about as being of historic significance!
When we were in WadiRhum (Jordan), there was "graffiti" from 2000 years ago. And I was amazed to see it.
So maybe some graffiti is OK.
merthyrmum

I'm amazed that people feel the need to write: I wuz here on ancient artifacts... But maybe that is OK too?

So which one of those is your John Hancock? LOL

Very interesting! And you are finding yourselves moving to colder climates? Can not wait to read about the cold north. Good luck on the move.

Oh, thanks for the post! It totally took me back to our trip to Petra last year. Man, it was so awesome. I liked some of the more recent graffiti we found: camels and goats etched into fire-blackened walls by nomadic people.

What's weird is in the Doge's Palace in Venice - in the map room, which was repainted sometime in the 17th century (I think) - there's a map of the Middle East, with Petra clearly marked. The Professor and I found this incredibly perplexing, in the Dan Brown sense.

Interesting! Were they difficult to find?