Sightseeing in London would have been fun even it had simply been Hubby and I holding hands, arguing about nicked napkins, and vociferously airing our grievances about line closures on the London Underground. Thanks to the nifty new toy we purchased in Dubai, it was even better. You see, our visit to the new Dubai Mall resulted in not only a much-needed pair of sandals for Hubby but also a new red Canon Power Shot SX200IS for me. The zoom on this camera is beyond amazing and we (or maybe it was just me) had fun playing with it whenever possible.

This is a photo we took of Big Ben while we were walking from Buckingham Palace along the Mall. The first is a photo shot simply through the viewfinder. The second is using the 48X Super Zoom.

I wish I had photos of the same places taken with my old pink camera to better demonstrate the improved quality. To be fair, Super Zoom can appear somewhat 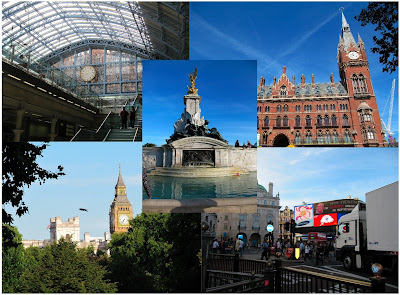 pixilated on the screen initially and is incredibly difficult to focus. Despite relatively steady hands, both Hubby and I found the camera shaking uncontrollably whenever we narrowed the camera’s focus to use Super Zoom.

Of course, part of our trouble may have been the amount of alcohol we consumed in London. With the exception of our forays into Jamie Oliver’s restaurants, we relied almost entirely on pubs to provide us with sustenance. It did, however, teach me one thing: I could never, ever live in Britain. Between drinking endless pints of cider and enjoying countless plates of chips and gravy and other great pub fare, I must have gained at least half a stone while we were in the UK.

I can’t think of a single moment we regretted in London. Between riding the tube, playing with the camera between drunken sips of whatever was on tap, quoting AA Milne to the guards at Buckingham Palace, and walking for hours on end, we had an amazing time in the English capital.
Posted by MsTypo at 9:45 PM

No way! that is a SUPER zoom! I've never had a camera that could do that!

And despite the extra drinks, I think you can safely blame the giggle problem on the zoom lens. Time to buy a tripod!

beautiful pictures! I'm envious of all your travels! I can't wait to be able to do that someday. Hope you're having a great week =)

Wow - that zoom is incredible! I think I need a new camera right away...

You forgot to mention all the eccentric Brits with their amazing sense of humour in this post! ;-)

I agree, London is a great city, although it has been over twenty years since I was there last time.;)
Wow, that zoom is out of this world! I love my camera, but it can not zoom at all, and it is very bad at focusing on close ups as well.
This is totally amazing, I so understand why you love it.;)
xo

Now that's a nifty super zoom. Yeah, I bet the pubs did not help for the steady hands.

I have this thing for the zoom lense. But...there are sometimes when I want to get the whole thing...and my lense will not cooperate. Why can't it all be in one lense?

And yes...the shaking with the super zoom...challenging!

Tsau!
Living in Britain - nope. Too many pubs! :)
Actually, I miss pub life here. Too lazy to sit in a car for 2 hrs (traffic jam to get in) to have a drink or two and then about 40 mins back...
But this is not forever...my mantra nowadays! :)

Those are GORGEOUS shots!!

Love the zoom capability! What will happen to "pink camera"??
Fish and chips and a good pint--yum. :)
merthyrmum

I used to live in Great Britain shortly after I was born. Only really have one memory of it and it had nothing to do with the country as it could've happened anywhere.

I did go back many years later and have some nice memories from that visit. Would love to go back sometime. Don't know if it'll ever happen but even if it doesn't, I'm happy with my memories!

looks like you're putting your new zoom to good use. i really want to go to england!

I gained weight when I lived in the UK. Chips. Also curry takeaway and pubs in general.

You should buy a gorillapod tripod - they are small and grippy and pretty cheap for a smaller camera.

I'm convinced, I really am - both about the cam and how brilliant London are.

It's a long time since I've been there (a very popular town for Norwegian to go there for Christmas shopping you know), so thanks for taking me down the memory lane!

Btw: I'm glad you would like to join us at the Oslo Blog Gathering 2010! Be aware of that I had to mover it one week forward due to family matters!

To say that I am only slightly jealous of your camera would be a terrible understatement.

As you continue to travel the world, the bar for your photographs has now been raised. :)

Your camera has insane capabilities!

I always gain weight when I travel too!

I have camera/lens envy. Of course, I also have photography-skill envy. Maybe I shoudl take a course...C

Great shots! And I miss pub food. Yorkshire pudding, the ploughman's lunch (with fruit bread and chunks of cheese), and for some reason, mushy peas with mint sauce.

It's a drinking den of iniquity....the entire country! I love it! ;O)

Now, that most def. is a super zoom :D
Lovely shots as well!

Man is that a super zoom! Excellent! One of the places I really really want to go to is London (and the English country side). Maybe one day I'll get there.