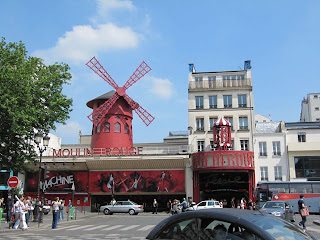 The last vacation The Ex and I took was to Paris. The fact that it was the weekend before I left for New Zealand is neither here nor there. As I’ve said before, our divorce was weird and I think going to one of the most romantic cities in the world to “celebrate” our divorce just proves that we aren’t your average former couple.

The Ex had never been to the city on the Seine before except to fly through so it was a chance for him to gain a new country and for me to revisit a place where I made many happy memories as a teen. Sadly, we didn’t make it to the Musé D’Orsay (probably my favourite museum on the planet) but I did 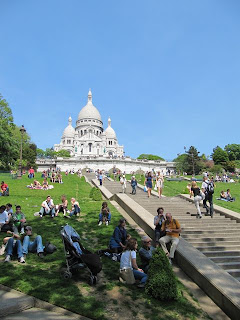 take him up Montmartre to see the Basilique du Sacré-Cœur, a church I have long felt to be far more special and beautiful than the over-hyped Notre Dame.

Our day included a walk along the Champs-Élysées and a photo op at the Arc de Triomphe, which I think completely underwhelmed The Ex who rose to the occasion by cracking jokes whose punch lines all included the word Vichy. In other “crimes against Paris” not only did I not take him to the Louvre (don’t get me started on the postage stamp-sized tourist Mecca that is La Jaconde), but we also failed to visit the Eiffel Tower due to time constraints.

All through our walks along famed streets, past cultural icons, and through neighbourhoods that existed long before Canada even had a constitution, we both knew our time was short. This was the last day we would spend together before I boarded the Eurostar for London and we both hit the restart button on our lives. With our 12th wedding anniversary less than a week behind us our feet guided us to the last romantic meal we would ever share. 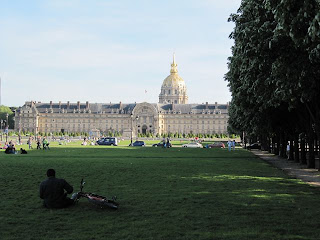 Located a stone’s throw from Les Invalides, Il Vino is a restaurant I would not hesitate to recommend to anyone visiting the City of Lights. The concept of this Michelin starred eatery is brilliant: diners order the wine of their choice and the chef presents the perfect meal to accompany their selections. There is an "à la carte" wine menu but The Ex and I both opted for different prix fixe menus that would guide us from starters through dessert.

I should note here why The Ex chose the menu he did: his first course wine was Sula! All of you in India are probably doubled over in laughter that we came all the way to France to drink this unspectacular Indian wine. When the sommelier brought over the bottle, The Ex and I both started laughing as he described the attributes of this imported wine. When we explained how we were familiar with the selection, he looked more than slightly abashed. 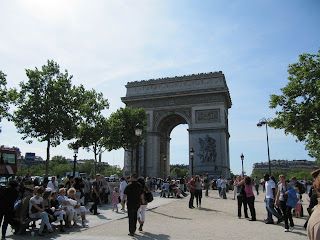 My prix fixe was a guessing game from beginning to end: the wines were poured and I was left to guess what I was drinking. After each course, our sommelier/waiter would come over to find out how I had fared in the wine version of blind man’s bluff.

From the excellent service to the exquisite food, the entire meal was pitch perfect. Perhaps my favourite part of the meal was the fact that had I been offered a menu with my courses as options, I wouldn’t have chosen most them. I would never have thought to order a tartare of ahi tuna and yet it was not only the perfect companion to my Chenin Blanc, but also the delicate flavours were a revelation to my palate.

Six glasses of wine later, we were both more than tipsy as we made our way back to the hotel. Neither of us spoke about what was about to happen as The Ex helped me pack my suitcase for the adventure that lay ahead. Instead, we discussed his business meetings that had obstinately brought us to the French capital.

Things were changing for us and yet we knew some things would always remain the same. As we parted company the next morning, I’m not sure which of those realities scared us more. Perhaps only time will tell.
Posted by MsTypo at 8:58 PM

Saying goodbye is always hard, but it sounds like it was very peaceful for the two of you. It sounds like there are many things you will miss as well. Nice that you have this wonderful memory.

Nice that you were able to have such an amicable parting.

Drive into www.expresscakesdelhi.com to send online cakes to Delhi for your loved ones and treat them with lavishness. You can also send fresh flowers and other gifts along with tasty cakes to Delhi. Bring smile to their faces by preferring to send from our wide range of tasty cakes, flowers and other amazing gifts for delivery in Delhi. For details, visit www.expresscakesdelhi.com.

I have just caught up with your blog after seeing a post on facebook. The past year sounds like it must have been terribly hard. Good for you though for going on an adventure - very brave and I hope you enjoy it and of course, find the you you are looking for

What a beautiful way to say goodbye, and I hope this bodes well to your keeping the Ex has a longtime friend, as he was very obviously, a good part of your life for a long time.

And so your travels continue...
merthyrmum

I was in Paris during Easter and loved the city!

It's truly the most romantic city in the world...plus delicious pastries.

I'm slow, but I'm catching on. I'm sorry that your journeys have included this detour, but I am in awe of your equanimity. P.S. Equanimity, as it turns out, is very hard to spell ...

I've always hated Paris. I was there 2 days. Still hate it.

This trip must have been incredibly hard, knowing that at the end of it, you would no longer be together. It sounds like you handled it with grace and class which I applaud you for as I doubt I could've been like that, knowing the end was so close.

Dear Typo- Any change, even for the "good", can be hard. You have been very brave facing your new life. I'm glad you're back visiting us here in the blogosphere. I missed you. :)

The photos are lovely. It is uniquely romantic that you had your farwell in Paris. I hope your adventures will take you to a happy place again soon. But remember you are allowed to grieve your lost dreams. Its all a part of the process as painful as it might be.

Good luck! I came to your blog to read a bit about Egypt, and instead, found a whole post on Paris (where I am heading to in a couple of weeks).

This was so beautifully narrated, even though I know your heart must have been breaking when you wrote this.
I hope all is well with you, where ever you might be...
xo

Wow, it's been two months, I hope you are ok!

Sorry to hear about all of this. You both are in our hearts. I will me the two of you together, but wish you happiness apart too! Glad we've been able to have some fun times together. Good luck with your travels! Heather Micheels