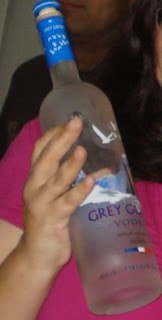 I awoke from my nap, cocooned in the soft blanket the airline had provided me. My body was curled into a ball at an odd angle on the flat bed and as I stretched and tried to awaken my limbs, I felt my toes hit the wall of the seat in front of me.

I looked around to see how long I had been out and noticed that most of my fellow passengers were still slumbering. A quick peek behind me showed where the few wakeful souls were gathered: the bar.

After making myself mildly presentable, I ambled toward the back of the A380 in anticipation of a snack and a perhaps even beverage or two. I popped a canapé into my mouth and asked the flight attendant who was currently playing bartender for a screwdriver. Orange juice, I reasoned, seemed a good way to start my morning and the vodka would help remind me that it was nighttime where I was headed.

With a generous serving of Grey Goose in hand, I looked around at my fellow passengers and searched for an opening. No matter how shy I felt like being, this trip was designed to break me out of my shell and just because I hadn’t arrived in New Zealand 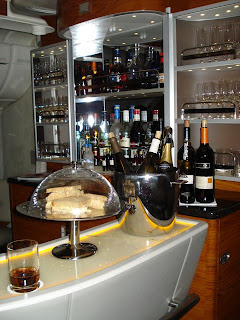 yet was no reason to cower behind my usual reserved façade. I evaluated my choices: the parents from first class with their toddler, a group of business travelers chatting about their jobs, or two Indian gentleman who seemed to be conducting business in the corner.

I made up my mind quickly and jumped into the middle of the group who were, I think it is safe to say, a little off put my forwardness… at least to start with. Several hours and one bottle of Grey Goose later I felt I had known this group for at least an entire day. We laughed over travel nightmares, compared notes about tourist hot spots in Nairobi, encouraged each other to continue for, “One more round!” and at the beginning of the second bottle of vodka even started sharing pieces of our life stories. I realized that the intimacy of the business bar on the plane had been fully achieved when we started talking about people who had returned to their seats behind their backs.

I knew we would likely never see each other ever again, in at least two of the cases, was rather disappointed by this. These mile high friends were only fleeting but I vowed to myself that the dare I made myself to start talking to them would not be a figment of the dream I awoke from but rather a new stepping off point from which I would not look back. Making friends of strangers was not as difficult as advertised, I told myself. It just took a little courage and a couple of shots of Grey Goose vodka.
Posted by MsTypo at 9:26 PM

You travel in class! Mile high friends is, I think, a much better alternative to the mile high club. heh heh. Glad you broke out of your shell. :)

Great! and how was your morning, headache? Nope, I guess! :)

Mile high and high? May I one day get a chance to travel business/first class on an A380!
merthyrmum

That surely beats riding in a pick-up truck towing a pop-up camper.

I've never seen a bar on a plane! Usually, the flights I've been on, you just order a drink from the flight attendant.

Love this story. A little inner push paid off and it is only the start of your new adventures.