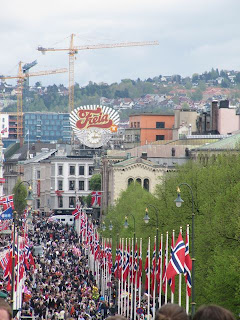 I want to make it clear up front that I too could be 5’10”, gorgeous, blonde, slim, athletic, and have incredible fashion sense, but I choose not to. I prefer to stand out from the crowd and be unique in my brunette, short, chubby brilliance. After all, in a land where the “ugly girls” are at least a seven and still rate a wolf whistle, it’s hard to compete.

Over the past many years, I have travelled around the world and seen some of the most beautiful women on the planet. Ethiopian women far and away top the list for me, while friends who visited me in Kenya put the local women in Nairobi in highest esteem. In India, I saw some true beauties but also a lot of women who put a lot of effort into achieving that “natural” look. Most European women I’ve seen also fall into that category.

Perhaps that’s why Norwegian women vex me so much. In any other country, they would be hounded by modeling agencies but here they’re just average. Yes, I lived in a country filled with Heidi Klum lookalikes. Isn’t that just great for a girl’s ego?

It never ceases to amuse me that in North America people joke about the “Swedish Hot Tub Team.” Obviously those men have never met the world’s genetic lottery winners – Norwegian women.

Yet it isn’t simply their tall, gorgeous, blondness that people notice. (And I have yet to meet a man who doesn’t drool over those qualities.) As a woman, what I notice is the fact that Norwegian women have an innate sense of style of fashion that I will likely never achieve even if taken in hand by Stella McCartney herself. Women there pull on a pair of casual leggings, a long sweater, and tie the outfit together with a pair of knee high boots with a casual elegance that appears to be second nature. I’ve seen women elsewhere try to pull off the fashion statements that Oslo’s inhabitants seem to wear with such grace but it simply doesn’t work. You can tell the also-rans are trying.

People more cynical than myself might point out that there are a lot of salons in Oslo that specialize in colouring hair, or that women are that thin because lutefisk just doesn’t taste that good. Women with a more salacious eye than I would also observe that the population distribution of hotness in Norway is spread equally between the sexes. But I think I’ll just bask in my uniquely short stature, brown hair, and complete lack of ability to match clothes knowing that I’m unique duck in this flock of swans.

Author's Note: It was only after writing this post I discovered that I didn't actually have any photos of hot Norwegian women in their natural habitat. Sorry boys!
Posted by MsTypo at 11:00 PM

So good to see you show up in google reader again. I agree with your perspective in this post. Some women just have it...

Well, just a small note; that Swedish hot tub team is not an exaggeration.;) I am not sure if you have ever been in Sweden, but those ladies there are super gorgeous too, let me reassure you of that, as I grew up there.;) The Scandinavians simply have it.;) But then again, I am not so sure that I am all that fond of their mentality, but that is another subject all together.;)
Ultimately, no matter the looks, the clothes, the fashion sense, or being tall or skinny; it all comes down to charisma.;)
I do LOVE the new look here.;) The image in the header is breathtaking.
Have a great Friday,
xo

I think shorter, darker, and a little wider must have its advantages - especially when accompanied by wit, articulation, and insight. Yes, Typ0, you got it all :)

I'm half Norwegian but seem to have missed out on the "hottie" gene. Tall? Yes. Blonde? Yes. But also wide and lacking style. Boo hoo! :)

By the way, love the new look of the blog!

I've never been lucky enough to have "it," whatever "it" is.

I don't mind the blah brown haircolor so much as I can always change it and often do but I've always wanted to be taller, thinner, pretty, more fashionable, etc. Yet, if I had all those things, I'd still want more. I can't seem to be happy with what I have.

Love the new look of the blog. New look for a new life!

Welcome back--to the blog that is.
And you are just fine the way you are.
merthyrmum

I am happy that you pointed out that the Norwegian Men er equally gorgeous! Shouldn't overlook that point, very important indeed. Lets just be happy that we stand out in a crowd, shall we ;-)

I think that the Swedes are very good-looking too! I think it's a Nordic quality rather than just a Norwegian one.

I can't match clothes either! And I love it.

What's pretty to me, is someone with a good attitude about who they are. Sure, some are blessed with Hollywood genes, but that's only a part of it. Nasty personality is ugly. Hatefulness is ugly. Whining about your looks - no matter how 'good' or 'bad' they are - is not very attractive either. Not much is as gross as a skinny pretty woman who constantly whinges about her weight... so much so that her kindergarten age daughter refuses sweets because she 'diets' too. I like it when people like themselves. :)

welcome back!Soo good to be here reading your adventures, I've read your newest post and I'm glad that you've decided on this new agenda to travel on your own, can't wait to read about them!

Thanks for the compliments on the new look! :) The photo at the top is one i took on vacation in Zanzibar a couple of years ago. It is also currently serving as the wallpaper on my laptop. :)

Thanks for sticking with me. I'm trying to write but found that when i went to New Zealand my muse got on a different flight. D'oh!