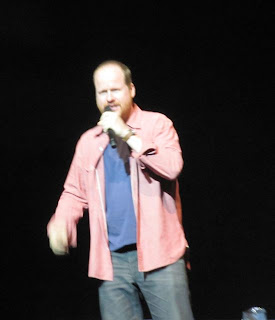 Sometimes awesome things happen when you least expect them. Last week while I was online looking for opera tickets I saw the words “Joss Whedon: From Buffy to Dr. Horrible, Infinity & Beyond” and my heart skipped a beat. Five minutes later I discovered the event was sold out and my heart stopped beating. That was when I started stalking the Sydney Opera House box office, calling every two hours in hopes that one ticket would magically become free.

I was one call away from threatening to hold my breath until they handed over a ticket when I accidentally found a ticket for sale on Gumtree. Not just any ticket mind you, a $200 ticket that included an awesome seat and a ticket to the after event where we could meet Joss one on one in person! I immediately emailed the seller to see if the ticket was still available and then texted several people and went on Facebook so my friends could talk me into spending my food budget for the next two weeks on a two hour Buffy-gasm.

Despite my fears that the ticket would end up being a scam I agreed to purchase the ticket at its rather high face value and meet the seller at the Opera House on Sunday where we would attend the event together with her boyfriend. The huge theatre filled quickly with eager fangeeks like me. Despite my deepest fantasies, I knew James Marsters wasn’t going to make a surprise appearance but that didn’t stop me from daydreaming about the possibility with a few other nearby fans. 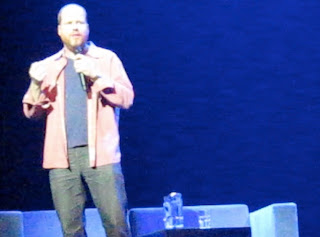 Then the lights went down and the audience roared its approval. After a brief introduction by the host, Australian comedian Wil Anderson, Joss Whedon took the stage at approximately 3:10p.m. to thunderous applause. The hours that followed can safely be called among the coolest of my life and infinitely worth the money I spent on the ticket.

Whedon started by acknowledging that at the Melbourne Q&A on Friday he had been asked the usual barrage of questions he was so frequently subjected to: “Why do you write about corporate oppression? Why do you write such strong female characters? Why do you hate families?” In order to head off similar questions that afternoon Whedon talked for the next 45 minutes about writing, “the dark place,” and the cult of Whedon.

Since I obstinately want to be a writer some day, I thought I’d start with his brilliant and insightful comments about the writing process. Over the course of the afternoon Joss (we’re close so I can call him that) admitted to writing about helplessness, being alone, and, of course, adolescent girls with superpowers. It was the first two, however, that led to the latter. “Two things I understood when as a child,” he said, “that I was scared and that I was alone.” This, he pointed out is 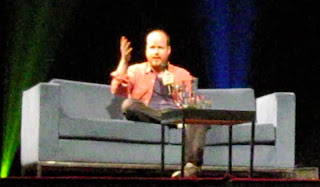 essential to writers. “If you want to become a writer,” and I do, “you have to have a certain aloneness in you. Guess what: you’re going to spend a lot of time alone!”

Being alone, helpless, and clueless is at the heart of “the dark place” for Whedon who said that everything he will ever write “will always come from the dark place.” He considers this to be essential for any writer. Being an author is more than simply “writing better,” he felt it was about getting to the dark place: “Get in with a trowel and write from that. Because that’s the only thing worth listening to.”

“Stories,” he continued, “can be a way to pass the time or they can get inside you.” The key to the latter is making sure that your tales tell the story of WHY “because if there’s no why in the story you’re telling then you’re spinning a yarn. And that’s fine. That’s a noble thing too. But I don’t want to be anything less than a storyteller. I’m proud of that.”’ 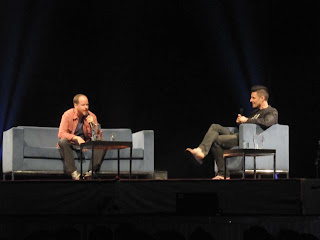 Later during the Q&A Whedon demonstrated not only his love of the fans but also his respect for those amateurs who hoped to someday follow in his footsteps. So many authors nowadays respond derisively to fanfic, which make Joss’s comments about this popular fan pastime a fairly inspirational breath of fresh air. He admitted to having read some of it and related a story of one he read early on around the 2nd or 3rd season that stayed with him because the writer was “super invested” in what they had created. He went on to call these fan created universes a great compliment to him and his work: “I think it is maybe the most beautiful part of the whole process, is the fact that there’s fanfic.”

Today’s post is beginning to edge near “ridiculously long” even by my standards. I haven’t even talked about the future of Once More with Feeling on Broadway, the Whedon Method, why everything is Anne Rice’s fault, a singing Thor, the joy of Nabokov and Burnett, guerrilla autographs, or the awesomeness of meeting other fangeeks. Rather than make this the post that won’t end, I’ll just ask you to tune in again tomorrow when I will continue to write about Joss freaking Whedon.
Posted by MsTypo at 8:54 AM

I am of the strong opinion that nothing you post could be ridiculously long - even if, in my great ignorance, I don't know who Joss is. Now I have something to Google, I suppose!

Caution - get googling! Joss is ACE!

I'm so jealous of you, N. I wish I had been there!

Seeing that I don't know/know very few of any of these people, it is interesting reading.
Glad you're back on your blog. :)
Glad you spent the money!!
merthyrmum

Looks like it was totally worth the effort and the money. Glad you enjoyed it and didn't even have to turn blue!!

I'm glad you had such a wonderful time. So I'm guessing you're back in the states then? Must be quite the change!

I'm so happy you took the plunge and went!

Greetings from Casablanca! (Earlier it was Cairo but moved here in April...)
Hope life is good!