“Thank You For Creating Buffy” 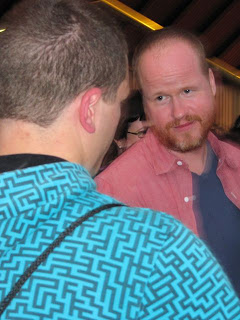 When last we left our intrepid fangirl she was drooling over every word Joss Whedon cared to share about the craft of writing. Although exceedingly brilliant in his awesomeness (I know that made no sense but it doesn’t make it any less true), Whedon also spoke about his other creative outlets like Buffy (the character he said was most like although he didn’t realize it for years), Firefly (the show that taught him about grief), and The Avengers (whose cast, he said, is devoid of egos.)

During the Q&A Whedon addressed that oft asked question about the possibility of seeing the brilliant Buffy the Vampire Slayer episode Once More with Feeling on Broadway. To the great disappointment of everyone present, he referred to his Broadway dream as a “pipe dream.” He rushed to point out that it was, however, “a really good pipe” that was unfortunately being clogged up due to time issues.

On the issue of his creations singing I have this one-off quote about regarding the Avengers: “Everybody wants to hear Thor sing!” I could put it in context for you but I think leaving it out there like that is far more amusing. 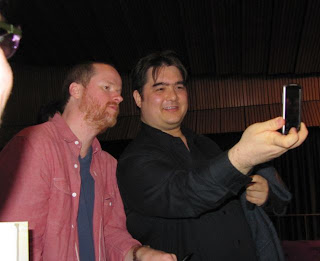 Later one of the audience members asked a question regarding the so-called “Joss Whedon Method” of writing wherein the audience falls in love with an amazing character only to have them killed unexpectely. Whedon joked that when people heard he was scheduled to direct an episode of Glee everyone’s first question was, “Who is he going to kill?” He defended himself saying this was not his “defining characteristic,” but rather that it simply made for more interesting reading and watching to when someone unexpected dies.

During one of the more amusing moments of the afternoon, the gifted artist was asked if he felt any guilt about the recent vampire resurgence in popular culture. Whedon “refused to take the heat” for this fangy development, and put the blame solely on Anne Rice whose “Interview with the Vampire” he read at 15.

Hours after basking in Joss’s presence, my roommates at the hostel told me I was still glowing but I can safely certainly wasn’t the only one affected by him. From the deafening roars of approval throughout his talk to the blind adoration I saw on the faces of the other people lucky enough to attend the post talk VIP event, Whedon need not worry about the loyalty of his Australian fans.

The VIP event was the reason my ticket cost so much and was well worth the money spent. I drank several glasses of sparkling wine and ate my share of canapés with 150 of Joss Whedon’s closest fangeeks friends after the general talk. We all gathered in the North lobby grasping for whatever brief moment the talented man could spare. You could always tell where in the room the room he was located by looking for the throng of people with their eyes glazed over while he addressed individual questions and comments. 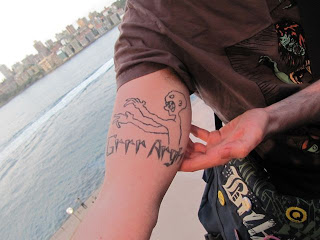 Since I did not want to appear too eager I waited a solid 10 minutes after he first arrived in the room before making my move. I joined the adoring crowd and waited for the perfect moment to ask my question. I listened to him respond to questions about costuming on Buffy and take in the awesome fan tattoo pictured (pictured left), while I debated whether I should ask a fangirl question about the demise of his Wonder Woman project, or go with a smartgirl question about authors who inspired him.

My moment came when Whedon’s publicist attempted to disengage him from his current gaggle of fans and move him across the room to a new gaggle. “Mr. Whedon,” I said quickly trying to get his attention before he walked away, “I was wondering which authors intimidated you? The first time I read Nabokov’s Lolita I swore I’d never pick up a pen again. Who does that for you?”

He looked at me with what I choose to interpret as respect and said it was funny that I mentioned Lolita as he was going to talk about the relationship between his love of Lolita and Frances Hodgson Burnett’s The Little Princess but felt that people would think that was weird. I laughed and said that he would have the whole audience that way: the women would think his love of The Little Princess was adorable and the men would high five his Lolita fixation. I glazed over much of the conversation that followed because I was too busy chanting, “He liked my question!!” over and over in my head. 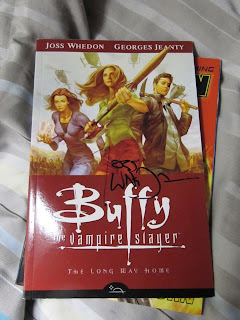 Five minutes later my punkest move of the day unfolded. Whedon had dutifully followed his publicist across the room and was generously posing for photos with several fans despite earlier warnings not to ask him for any photos or autographs. The first photo marked the beginning of the end for the publicist’s control over the fangeeks – or at least over me.

Earlier that day I had visited a local comic book store to purchase a copy of the Buffy Season 8 graphic novel on the off chance I would have an opportunity to obtain Whedon’s autograph. With the book burning a hole in my purse I watched as another fan handed him a copy of the Whedon-penned Astonishing X-Men (Gifted), and asked for an autograph. That’s when I made my move.

“Since you already have an indelible marker in your hand would you mind?” I said in my most pathetic fangirl voice. With a sigh he did just that and made my entire freaking year. You will be proud to hear that I waited exactly 23 seconds during which I walked a suitable four feet away before I squealed with glee and jumped up and down, clutching the book to my chest. “Well played,” one of my new friends said admiringly. I simply nodded and continued my geeky happy dance. 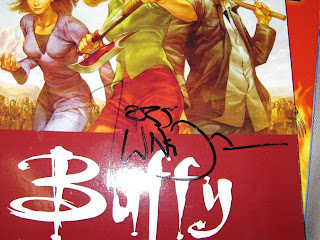 As awesome-tastic as the entire Joss Whedon talk and after-event were, it was these newfound friends who were the highlight of the event for me. I hung out with five people who ranged from a recent high school graduate to a PhD candidate writing his dissertation about popular culture. These were well-spoken individuals whose love of an adolescent girl with superpowers had evolved into a love of her creator: Joss Whedon.

After partaking of the “free” alcohol at the VIP event three of us moved onto a bar in the Rocks where we proceeded to talk about the brilliance of fanfic, favourite Buffy/Angel moments, ourselves, and everything in between. Over snacks and a couple bottles of wine, we bonded with nothing more than the love a third generation television writer between us. We didn’t know “Rhonda the Immortal Waitress,” we weren’t about to be “Touched by an Equalizer,” and we had all forgotten to vote for Amy Ackers as Australia’s new Prime Minister, but none of that mattered. We were prepared to bring our number-2 pencils to work on Monday and we loved the man who wrote from his “dark place,” and that was enough for a day of friendship and Scooby bonding.
Posted by MsTypo at 7:59 AM

Totally. Freakin'. Awesome. You are my hero!

That a great tale. I've never heard of him, never watched Buffy, etc. But he sounds interesting. Glad you got to meet him!

You certainly had a fun and exciting afternoon and evening!
Well done on getting the autographs!
merthyrmum

smart girl question is always the way to go...and well done on the autograph acquisition!

btw - enjoying your blog, which I found following links from some blogs here in Cairo. Always glad to find another traveler-who-is-connected-to-the-whedonverse blog.

There are NO WORDS for how jealous I am. I love Joss Whedon and have been such a fan for years.

I don't let myself watch the entire series of Firefly start to finish anymore because it always just gets me upset again over its cancellation. Instead, I'll watch an episode or two here and there. Never the whole thing.

I am SO EXCITED that he's doing The Avengers. It's going to be amazing.