A Fly in the Soup 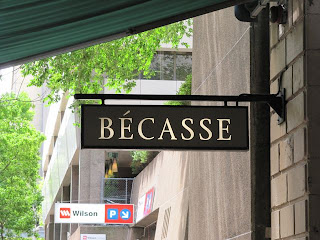 The annual Sydney International Food Festival was held in October and was marked with great events like Breakfast on the Bridge, Night Noodle Markets, and the “Hats Off” chef-hosted dinners at several of the best restaurants in town. The extensive month-long program also included prix-fixe lunch menus at numerous restaurants around the city. After a great deal of research and time spent comparing menus, I planned my Food Festival participation in the form of lunch at Bécasse – a French restaurant located near the QVB. My $65 lunch would include three courses and a glass of wine, which is a good deal in any book.

Midmonth, I headed to Clarence Street and popped into the restaurant around 1:15 p.m. About a third of the tables were empty so I didn’t anticipate any difficulties. The rather brusque hostess raked her eyes along me; from my scuffed Doc Martin sandals, my worn black jeans and white lace top, and finally ended with a look of distaste at the bun I had hastily fastened in deference to the heat of the day. Although I wasn’t in a business suit, I was by no means ill dressed or slovenly - a review of the dining room showed equally casual patrons.

I replied to the hostess’s condescending tone with a smile and explained I didn’t have a reservation and would like a table for one. “No reservation? I’m afraid the earliest I can seat you is two o’clock.” I smiled and said it was okay but would try again another day. Part of me knew this was the response she was hoping for but I didn’t care. It was a lovely day and my favourite café was only a thirty-minute walk away. 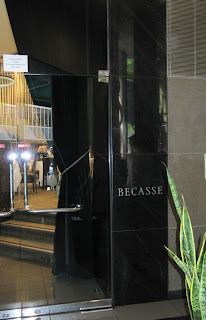 A week later, I returned to Bécasse on a whim. It was 12:20 p.m. and once again the dining room was busy but not full. The same hostess greeted me with the same Ice Princess aloofness she demonstrated on my previous visit. This time when she offered me a 2:00 p.m. seating, I thanked her and said that would be perfect. Before I left, I made sure the kitchen would not rush me due to the late seating. She explained that if I wanted the prix-fixe, it wouldn’t be a problem and seemed perturbed by my desire to actually read the menu before I committed myself.

After some enjoyable window-shopping, I returned to Bécasse twenty minutes before my scheduled reservation. I smiled at the now familiar hostess and said I knew I was early but would it be possible to be seated. The response was an unequivocal “no.”

“May I just sit and order a cocktail?”

“We don’t really have a bar,” she replied with some vague hand waving toward the small bar area behind her. “There are lots of cafés in the area you can sit at.”

I was literally shocked into silence. Rather than let me sit and pay for the privilege of not being served, she was sending me away. Even if they didn’t have martinis, I could have had a glass of wine and thus provided revenue for the restaurant while I sat in silence. I understand that kitchens don’t like to be rushed and wait staff rely on timed seatings so they don’t have to serve too many people at one time, but all I wanted to do was sit with my Kindle and have a drink while I waited patiently for 2:00 to roll around.

That was the straw that broke this camel’s back. “You know what, that’s fine. You can cancel my reservation,” I said in a decidedly arctic tone. “All I wanted to do was eat lunch and yet this is the third time I have entered this restaurant and the third time you’ve been borderline rude to me. I just wanted some lunch but never mind.”

“You’ve come during Let’s Do Lunch so we are quite busy,” she replied defensively.

“Let’s Do Lunch explains the seatings but not why you have been discourteous and impolite. Have a good day.” I turned, walked down the four stairs to the front door and walked out with the Ice Princess sputtering behind me.

I left Bécasse literally shaking with fury. Just because I’m not wearing a size six dress by Chanel is no reason to be disrespectful. Customer service is important to me – whether I’m calling my bank, buying a dress, or dining in a restaurant. Poor customer service irks me like little else and it is always an important factor in how I review any restaurant or business.

Blind with righteous indignation, I stalked up Oxford Street and soon found myself back at my café: Coco Cubano. I walked in the door and was greeted with a smile by one of the baristas who grinned and asked if I wanted an Iced Blanco (cold white chocolate). I smiled ruefully and said bemoaned my predictability. “Not predictable,” he replied. “We just like seeing our regulars.”

My heart did a little flip flop. I smiled stupidly and paid for my cake and iced chocolate before taking my usual seat in the big front window. I was a regular at my favourite café in Sydney. How freaking cool was that?

In the space of 45 minutes, I had literally run the customer service gamut. I had seen service that would leave Frank Bruni cringing and then been the recipient of as high a compliment a customer can possibly receive. Good food can only get a restaurant or café so far because no chef or owner can be on the floor all the time. In the end, good front of house staff can make all the difference between a two or three-star rating, or that ever important factor in all businesses – repeat customers.

I hope the Ice Princess is happy. Sure, I was never going to be a regular at Bécasse but I was a willing, paying customer who wanted a good meal and a glass or two of wine. She judged me lacking because I didn’t meet some mysterious criteria known only in her mind - and after some thought I’m okay with that. I may not have had a three-course meal and a glass of wine but I did become a regular at a place that makes amazing hot chocolate. Sounds like a good day to me.
Posted by MsTypo at 12:16 AM

Im surprised you didn't tell Ice Princess that she was "discourteous and inhospitable" lol, but what you said was spot on.

I feel embarrassed that I live in a city that has a restaurant that treated you like that. Good on Coco Cubano though!

Oh, I agree with Lois! I'm sure the reference would have flown over her head, but it would have been AWESOME.

Mean people suck, no matter who they are or where they work. I am now very intrigued by cold chocolate drinks.

Bad, discourteous service has always been the very bottom of the heap to me:it leaves a vey bad/nasty taste in my mouth.
I'm glad you wrote this blog and if anyone can print this and drop it off at the restaurant: now that would be great!
merthyrmum

I've worked in customer service positions for years and that waitress lady was just downright RUDE!

That quote at the top of your post is so true. I used to hear it ALL the time when I worked at a certain bank. People would overdraw their bank accounts regularly and didn't want to have any kind of responsibility for it. If the customer didn't meet certain criteria, we weren't allowed to reverse any fees. Of course the customer would get angry and many of them repeated that same quote to me. I always wanted to say, "You know, if you actually accepted responsibility for once and kept track of all your checks and debits, you wouldn't be in this mess to begin with!" But of course I couldn't say that.

You've just proven Jeff Bezos famous quotation absolutely true. When are they going to learn what customer service is meant to be?

Mess with the bull you get the horns.

Mess with the writer you get the blog. *evil smile*