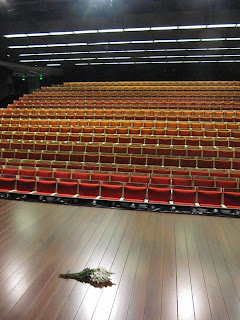 There is a fine line between love and obsession and I think I may have crossed it in Sydney. Shortly after arriving I entered a contest for a free Backstage Tour of the Sydney Opera House and although I didn’t win, I was given a chance to take the tour at half price. Some people might say three trips to the Opera House in the space of six weeks was excessive but I chose to ignore those naysayers and focus on the voice inside of me that wanted to tread the boards and test the famous acoustics for myself.

That’s right, I recited Shakespeare on the stage in the Concert Hall, conducted an imaginary orchestra in the pit of the Opera Theatre, and then sang The Pirates of Penzance on its stage. The drama geek in me was on fire as I danced through the corridors where privileged few had gone before.

But I’m getting ahead of myself…

I am not in any way shape or form a morning person so you can imagine my bliss when I learned the Backstage Tour started at 7:00 a.m. The early start, we were told, helped ensure admittance to more spaces before the artists needed them. Thanks to my genius move of sleeping through my alarm, I didn’t even have time to grab a venti triple shot white mocha before I arrived to meet the other seven people who would be joining me for the tour. We were a ragtag group from all over the planet with not a single morning person among us. 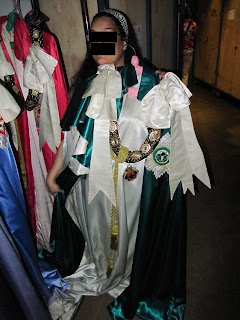 The tour, we were reminded, was not a traditional Opera House tour but rather one designed to take us through the inner workings of the famous landmark from the Kissing Wall behind the Concert Hall to a private dressing room with its own grand piano and a view of the Harbour Bridge. As a lifetime theatre geek I was literally bouncing with excitement despite the lack of caffeine.

We started our morning exploring some of the smaller venues at the Opera House like the Studio and the Playhouse. Both seemed well suited for high school or amateur performances. The Studio, in particular, was a great space for interactive or perhaps modern dance performances.

The group made its way through the truck corridors that run under the Opera House and Troy, a tourism major at the local university, regaled us with stories about everyone from Queen Elizabeth II and her bulletproof vest to an incredibly kind Pamela Anderson. We continued along the lower corridors and spotted inactive sets from the operas currently being performed. We also learned to respect the term “suicide door.” 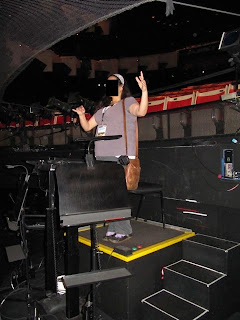 Our first stop in the Opera Theatre was the orchestra pit where I began what would soon turn into a habit: ignoring Troy in favour of doing something cooler. In this case it was being the first to wander onto the conductor’s platform, pick up an imaginary baton, and lead my invisible orchestra in a few bars of something with a solid 4/4 time.

Somewhere between quieting the brass section and inviting the strings to raise their bows in preparation for the next bar, I overheard Troy explain the purpose of the net above our heads. It turns out that many years ago live chickens were needed as stage dressing during a performance. The chickens, it seems, were not very good at taking stage directions and kept falling into the orchestra pit. In addition to saving chickens from stuffing up any random tuba bells, the net also saved someone’s life when an actor tripped during a sword fight and fell point down into the woodwinds.

We left the ghosts of chickens and percussion past to explore a hallway with dressing rooms and costumes ready for that night’s performance of Pirates of Penzance. Naturally, when everyone else was content to walk by and photograph the entire rack, I felt the need to pick one up and hold it up to see if it would fit. In addition to being surprisingly heavy it was also, sadly, too long. 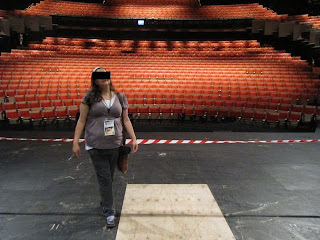 Finally, we reached the door of the Opera Theatre and I was reduced into a quivering puddle of fangirl goo. Poor Troy was once again cast deep into the background of my consciousness as I ran upstage and began to sing a verse of Modern Major-General just because I could. Puck’s final speech from Midsummer Night’s Dream was next and, if I may brag for a moment, I must still have it (or at least be able to project effectively) as I saw workmen in the back of the balcony turn to listen me. Then again, they were probably hoping they were “slumbering.”

After I kissed the boards goodbye, we descended once again into the maze of corridors that link the different theatres to one another. We proceeded into the Concert Hall, which was currently occupied by the Sydney Symphony. Despite not having any rhythm what-so-ever I gravitated to the timpani in the back and from there recited a little Julius Caesar quietly enough for only the drums and xylophone to hear me. “Friends, percussions, symphony members, lend me your sheet music!”

Exploration was the keyword of the day and we soon found ourselves wandering the area beneath the stage where the trapdoors lead. Here, we were told stories about sleeping stagehands and performances canceled due to broken technology. 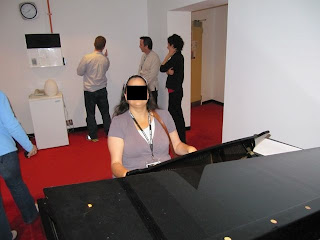 After an exploration of the remaining theatres we discovered our time was up and Cinderella was due to turn back into a pumpkin in time for the day’s matinees. Thankfully before we were all transmogrified into mice we were ushered into the large, airy greenroom where a lovely breakfast awaited us.

Over bacon and eggs our poor guide was subjected to a battering of questions by me everyone else from the moment he sat down. “How many times as the Scottish Play been performed here? What calamities accompanied the production?” “Is it possible to get up on the roof?” “How many operas are in the Company’s repertoire?” “What happened to the idiot to painted over the autograph wall in the star dressing room?” “What famous person most surprised you?” Troy was incredibly patient and answered all our questions no matter how random or bizarre.

I literally bounced out of the Sydney Opera House that morning. I had performed on the same stage as some of the most famous actors of our time. The fact I was doing it for a bunch of workmen and amused tourists could not diminish my accomplishment: I was Pavarotti and Sir Laurence Olivier all rolled in one. I am incredibly glad I participated in the informative and exhilarating Backstage Tour. More than that – I’m glad I was able to do it for half price thanks to the contest I “lost.” That morning last place felt an awful lot like first.
“All the world’s a stage, and all the men and women merely players.”
- William Shakespeare
Posted by MsTypo at 12:42 AM

Wow - I'd love to go on this tour. Sounds fabulous! And yeah for you for getting up there to recite and conduct!

And who did paint over the autograph wall? :)
What a great chance to experience this famous theatre from "the other side"!
merthyrmum