Part of the Collective 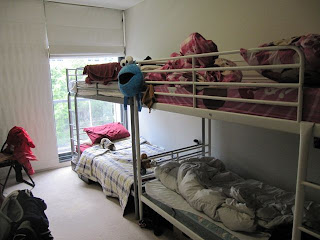 Little in this world can make you more agreeable, flexible, and humble than communal living. From creaking bunk beds to silent battles over square footage on the bathroom counter, sharing a room with total strangers can be an eye-opening experience for even the most adaptable and easy going among us. And heaven knows I’m neither of those things.

Growing-up the only girl of three children, I lucked into my own bedroom. This inadvertently nurtured many selfish tendencies including reading until all hours of the night and an alleged habit of dropping dirty clothes on the nearest flat surface.

At University, I unconsciously scared my first roommate off and she moved across campus to the all-girls dorms the first chance she had. The Ex was really the first long-term roomy I ever had and he didn’t really have much choice in the matter. He learned to put up with my piles of laundry on the chair by the door, and I pretended not to notice when he left the seat on the toilet up for the umpteenth time.

Running away from home on a budget means that I don’t get to stay in nice hotels and rely instead on hostels and rooming houses. In Auckland, I lucked into a flat with awesome housemates. Better than that, I lucked into a private room with a nice big bed. Insomnia be damned, I could read in bed with the lights on until six in the morning, drape my laundry line with undies and bras, or forget to make my bed safe in the knowledge that my room was my private sanctuary.

After BBS left Sydney, I was faced with a new reality – hostel living. I quickly found myself one of six people in a room where the only space I was allowed to claim as my own was a locker at the foot of my bed. Twelve years of living with The Ex had not prepared me for living in close quarters with five other people, each with their own annoying quirks. One older woman turned out the lights every night at 7 p.m. One roommate snored so loudly, I had to run down to the front desk and beg for a pair of earplugs. (Most of my hostelmates, for the record, were lovely but they make for far less interesting blog posts.) 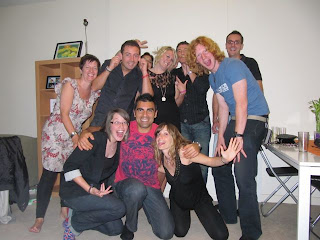 Looking for a flat in Sydney is a lot like banging your head repeatedly into a brick wall with rusty nails sticking out of it – but more painful. For a mere $300 a week, I could be one of 11 people living in a two bedroom flat with dubious hygienic standards. For $250 a week, I found a fabulous flat where I would be one of 10 plus my rent came complete with free rice. I found places with people sleeping on couches, the floor, or even the balcony in one case.

I was thrilled when I eventually found my flat in a great neighbourhood within walking distance of virtually everything. I was allotted a top bunk in a room with three other girls. There were a total of six people in the flat and we each had our shelf in the fridge and cupboards assigned to us in the kitchen. I staked out a corner of space in the bathroom for my toiletries and unpacked my clothes into the wire Ikea drawers in the closet. In deference to our tight space issues, I tried to keep my laundry in bags in the corner and made my bed each morning before I left for the day.

My bunkmates were two great girls from London, Pink and Mrs. Ronaldo, and a lovely girl from France named Frenchie. Despite the differences in our upbringings and ages, the four of us got along quite well. Many nights found us joking around, singing off-key, and teasing each other long after the lights had been turned out. Our group was known to go for picnics or spend the occasional Saturday evening at a local bar or club dancing the night away. 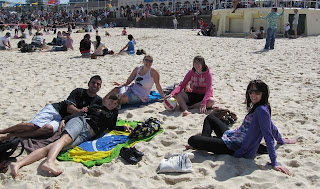 Rumor had it that one of the girls in the room snored but I have always been a sound sleeper and never heard it myself. My personal contribution to the chaos came in the form of a tiny pink reading light with an incredibly bright bulb. When the room was dark my small reading light was likened to a mega-watt spotlight. I eventually started reading under the covers in an attempt to keep from driving the other girls crazy.

We said good-bye to some people and welcomed new girls in their place as the weeks went by. New personalities wedged their way into our lives and fresh habits drove us to occasional bouts of thinly veiled politesse. For the most part, however, we all got along incredibly well.

Living with strangers is always a lesson in humility but bunking with them was something I was completely unprepared for. There was no door to separate the private from the public – our lives were on display and it was only discretion and a polite aversion of the senses that helped maintain the illusion of privacy. That said, I wouldn’t trade the weeks I spent in that room with those girls for anything. They kept me laughing and dancing even when teeth gnashing and foot stomping were my preferred choices. They taught me how to be less me for the sake of their sanity and reminded me how to be more myself for the sake of my own.

(I, it should be noted, have no annoying quirks. Nor do I snore or do anything that would make me a less than an ideal roommate. Anything you have heard to the contrary are all lies concocted by the Typ0 Defamation League. Really.)
Posted by MsTypo at 12:44 AM

Your blog just keeps getting more and more interesting. You are living an adventure for a lot of us.

Are you staying or moving on from there?

LOL! I hear ya.. I've spend many many months in crowded dormitories in Hong Kong, Thailand and China... Just us roomies and the cockroaches...

Having spent 9 years in a boarding school as a "young person", I totally agree: there are many days of angst but many days of pure enjoyment and fun.
Liked the picture of the group!
merthyrmum

I was the only girl growing up too. I've always had my own room. I can't imagine what it would be like to be married and have to share a bedroom with someone on a daily basis. Or to live with a boyfriend, I guess. I like things how I like them and that's that.

I've never lived in a hostel but did once move into a tiny two bedroom trailer. My roomie got the master bedroom since she moved in first, I got the other room. Once I got my twin bed in, there was barely enough room to turn around. Then we had three other roomies move in. The place was jam packed with people and things. Not something I'd wanna repeat.