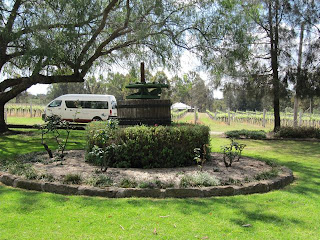 I have a secret to share but you have to promise not to tell anyone else. You see the truth of the matter is that I like wine. From time to time I enjoy imbibing a glass of vino and have even been known to open a bottle of fermented grape juice without sharing a drop with anyone else. This news is shocking, I know, so I can only hope you won’t be too overwhelmed to learn that I participated in a wine tour – this time in the Hunter Valley.

The tour began right in front of my flat where I was picked up at 7 a.m. sharp by our driver/guide, Phil. Imagine my surprise when the van doors opened to reveal my roommate, Mrs. Ronaldo, and her mother. I knew they were also attending a tour that day but had specifically picked a different tour so they wouldn’t think I was trying to horn in on their family time. Plus they had an even earlier pick-up at a location about ten minutes from Mum’s hotel. For reasons the three of us were unable to determine, they had paid less money for an entirely different tour and we all still ended up together. Go figure.

After I boarded we proceeded to pick up a Norwegian couple, a British couple, and a French guy. With the team assembled we set off across the Harbour Bridge and made our way into wine country. 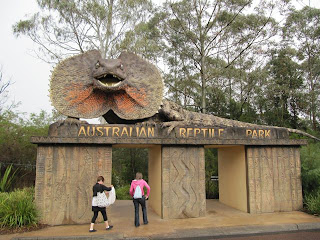 Those of you who know me well can imagine my bliss when I discovered our first stop was the Australian Reptile Park. An hour with snakes, spiders, and other random forms of creepy crawly critters – oh yay. I am proud to say that I managed avoid having a complete nervous breakdown during our interminable brief visit. After a bracing cup of coffee and the world’s smallest muffin most of the group broke off to visit the animals and I hightailed it back to the van before the snakes found out I was there, broke out of their pens, and came to attack me.

My relief was palpable when we pulled out of the parking lot and hit the road again. Our next stop surprisingly not alcohol related but historical. We were shown existing remnants of the old Convict Trail and told some of its history. I’m the first one to crack a joke about Australia being a land founded by jailbirds but the history behind the convicts is actually really interesting and Phil did a good job making it come alive. 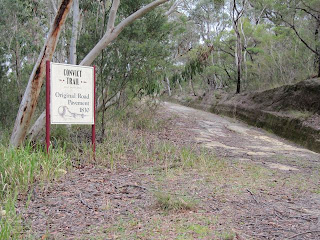 As much fun as history and scenery can be I was more than ready when we finally pulled in for our first drink of the day at Wollombi Tavern for a taste of Dr. Jurds Jungle Juice. The tavern must be cursed considering the calamities that have befallen it over the years, yet it has managed to survive the seven plagues in part thanks to Jungle Juice – a bracingly strong combination of port and brandy. I was by no means tempted to buy a bottle of the fire-inspired beverage but must admit that the rather sweet concoction was a nice pick-me-up at eleven o’clock in the morning.

We were finally on our way to our first winery of the day. Brokenwood was currently on a high from winning the “Best Winery” and “Best Cellar Door” of year from 2010 Hunter Wine Industry Awards. With hype like that I had lofty expectations as the eight of us lined up along the bar in the tasting room. Our tasting guide for the day was Ron, an incredibly charismatic former Canadian who kept us laughing and drinking for our entire visit.

The first thing I noticed was the cringingly warm temperature of the first white wine we were served. I have little shame in confessing one of my greatest wine sins is my adoration of overly chilled whites, and the thought of tasting a series of what could have been lovely wines at room temperature made me shudder. Ron, however, defended the choice and explained that while chilled was better for daily drinking, warm was the best way to enjoy a tasting glass and appreciate the subtleties of the selections. I’m still not sure I entirely buy his explanation but warm or cold the seven wines we sampled that day were definitely top notch. I wasn’t the only one feeling slightly tipsy when we departed Brokenwood Wines and was rather grateful to hear our next stop was lunch. Our four course tasting meal at the Hunter Valley Resort was a nice way to break up the day even if the wines were mediocre at best. It may be my salad leaning bias showing but I felt the Caesar Salad was easily the highlight of the meal. I was pleased to note that our guide, Phil, took note that Mrs. Weegie required gluten-free options and made sure that she would have appropriate choices for each course.

Thanks to generous friends who were not enamored of the wine choices with lunch, I had officially lost track of how many glasses I had drunk by the time we boarded the van for our next stop: Oakvale Wines.

To be fair, I should point out that Oakvale was incredibly busy when we arrived so our tasting guide was stuck helping at least two tables in addition to our own. Bad dye-job aside, her explanations of the wines were rushed and she appeared to have little love for the wines she was describing. Her greatest fault wasn’t even of her own making: she simply wasn’t nearly as much fun or informative as Ron. This may or may not have coloured the group’s overall opinion of the seven dismally average wines we tasted. 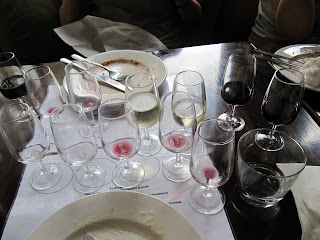 If you think that is the end of my tale you have no faith in my ability to pick a winning horse wine tour. Our next destination was one of the reasons I picked the tour in the first place: the Hunter Valley Chocolate Company. If there’s one thing I love more than a nicely chilled glass of wine, it’s a perfectly delectable bite of chocolate. I’m a simple woman, with simple needs and this tour gave me both my true loves!

We were initially given several samples including some chili chocolate that I found quite tasty but Mrs. Ronaldo else complained was too “spicy.” I admit to buying a bottle of wine at some point during the day but my best purchase all day was a bag of chocolate coconut macaroons like my mum used to make. Yum!

The tour was easily some of the best money I spent in Australia. Although we didn’t visit as many wineries as I would have liked, the quality of those we did more than made up for it. On our way home Phil even regaled us with a recitation of The Man From Snowy River as he drove back through the picturesque Hunter Valley toward Sydney. Good wine, good food, good friends, great chocolate – sounds like a perfect day in Australia to me.
Posted by MsTypo at 1:32 AM

Ooh, chocolate coconut macaroons, please! And Jim (from the movie 'man fr. snowy river')was one of the first big screen men to steal my heart. Rar.

The visit was useful. Content was really very informative. From www.giftbasketsmalaysia.my.

Chocolate AND wine? That must have been a goooood day! Look ;like you good a very fulltour.
Merthyrmum

Hic! What a bacchanalian adventure!

Make a perfect accent to any celebration by sending our beautiful flowers and gifts to your loved ones in France. From www.giftbasketsfrance.fr.

What a great wine tour - and I really need to remember to have someone drive the next time I'm going on one :)

I've always wanted to go to a wine tasting. I've heard you're supposed to spit the wine out after you've tasted it but I know I'd swallow it instead.

I think I want to come back and be you in my next life. Your life is soooooo much more interesting than my own.