Go Tell it on the Mountain 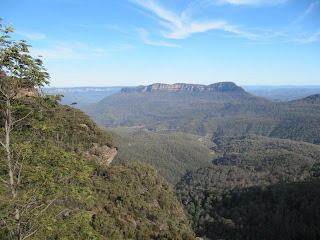 Before I wrote today’s post, I looked up “adventure” in my thesaurus but nothing seemed to quite capture what I had in mind. An exploit, a venture, an escapade – none of these words possessed the soul to accurately describe the thrill of hanging hundreds of meters over a forest supported only by a piece of glass. I suppose “exciting activity” might begin to express the rapture of giggles that ensued when we broke the rules and rode a horse, or played with echoes at the base of the valley. I suppose you could say we had fun but that seems such a tame word when compared with reality.

Katoomba’s Scenic World, I learned, is the best way to get the most bang for your Blue Mountain buck. From here, LoJo, Minnow, and I would have the entire Jamison Valley at our feet along with tour guides, rides, and even a gift shop to buy postcards to send home. Never one to do things by half measures, I quickly voted that we should check out the Scenic Skyway, Scenic Railway, and the Scenic Cableway. (They are obviously big on original names here at Scenic World.)

Our first stop was the Skyway, which would take us from one side of the valley to the other in a cabin suspended 200 meters above the Jamison Valley. The huge picture windows along the perimeter of the car aren’t the only way to get a good photo – shortly after departing the station, the center of the cabin was revealed to be made of glass and allows passengers a truly breathtaking view. 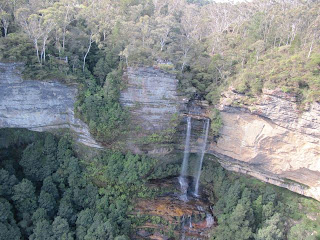 Our guide (and ride operator) shared facts about everything we saw from Wentworth Falls on our left to Orphan Rock on our right. LoJo was somewhat uncomfortable with the slightly swaying cabin suspended as it was so precariously high above the valley. She was, however, a great sport, and shared stories of past visits to the area. When we reached the other side, we took a short break for more photos before hopping back on the Skyway for the return trip.

Now that we had seen the tops of the trees from the Skyway, we needed to get down and see them up close so we hopped aboard the Scenic Cableway. The cable car’s operator/guide was giddily cheerful and a great ambassador for both the park and Australia. I’m usually so hyper I'm forbidden from eating sugar after 8 p.m. and even I was amused at our pixie stick fueled Cableway guardian.

We arrived at the bottom of the Cableway into lush green forest. The trees reached high above us and formed a canopy that shielded us from the blue skies above. The path in front of us offered walks of differing lengths but since our daylight was fast disappearing and we still had a long drive home ahead of us, we opted for the shorter route to the Railway. 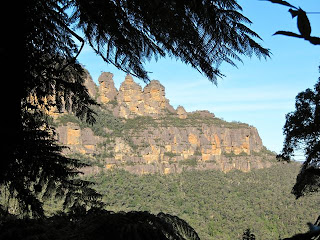 A devoted and hard-line city girl, I am none-the-less in awe of places like the Blue Mountains where nature literally wraps itself around you. I knew it was unlikely, but I half expected an echidna or wombat to peek around the corner at any moment. I was fully under the spell of the ancient trees when LoJo started demonstrating the Valley’s amazing echoing capabilities. Soon, not only was the valley responding but so were other tourists. Never one to let an opportunity to yell in public pass me by, I quickly joined in with a rousing round of “Aussie! Aussie! Aussie!” and waited for Minnow to respond with the appropriate, "Oy! Oy! Oy!” Obviously our delightful Skyway guide had rubbed off on us.

The remains of the area’s original coal mining operations are still visible for tourists and are an integral part of the experience for visitors to Katoomba. Part of this historical montage is a brass horse pulling a cart of coal. You might be surprised to learn but despite having a passing thought or two, I was not the first one to hop aboard the horse. To the shock of other tourists, the envy of several children who wished their parents were so cool, and the glee of her friends, Minnow was posing with the brass horse and moments later LoJo was astride it. 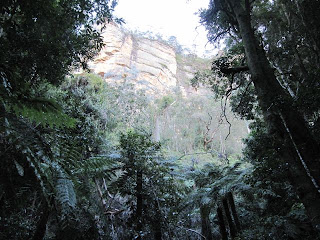 We each took turns and were delighted when one of the park’s employees walked by and laughed that she “saw nothing.” The three of us had regressed into giddy children and loved every minute of it.

Our final event of the day was the Scenic Railway – a 415-meter ride back up to the top of the valley at a 52-degree incline. The line was originally constructed in the 1880’s to haul shale up from the valley to the escarpment. After the Second World War, it was converted into a tourist attraction and has been wowing people ever since. We were perched at the front of the car so that the only thing between us, and a 52-degree drop back into the Jamison Valley was a thin wire cage. I read this was the steepest funicular in the world and I believe it. The trip back up to the escarpment was breathtaking for an entirely different reason than the ride down in the cable car.

The Blue Mountains are known as such because they appear to possess a bluish aura when viewed from a distance. Whether this is caused by UV radiation or light reflecting off the eucalyptus leaves is matter of some debate but either way, this UNESCO World Heritage Site is a definite must see for anyone in the Sydney area. I doubt anyone could possibly have as much fun as LoJo, Minnow, and I did that day but I dare you to try. Good friends really do make the difference between a good day and an amazing one. Thanks, girls!
Posted by MsTypo at 1:00 AM

Wow, if I hadn't already been there that day, I'd like to be after reading that. You have a gift mate. Glad you enjoyed it, that gives me joy.

Experiencing all the "scenic" options was obviously the only way to go...what breathtaking views from above and below. and I love waterfalls!
merthyrmum

What a wonderful adventure - in the real sense of the word!

Hey i am suuper boy