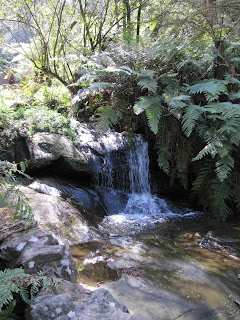 After an entire week with only me for company, LoJo was no doubt thrilled that Friday’s adventures expanded to include our fellow ecfriend, Minnow. I had been hearing about the Blue Mountains ever since I arrived in Sydney and was excited to finally see the popular tourist Mecca in person.

Our first stop was Leura Cascades for some light hiking, photo ops, and even a swing in the park. My months trekking up and down Sisyphus Hill in Auckland held me in good stead as we walked along the rough-hewn paths that cut through the beautiful forested park. Every so often, the creek skipped around a new corner and we were presented with another small waterfall.

While we explored, the three of us talked about the upcoming and much anticipated release of Jean M. Auel’s sixth book, The Land of Painted Caves, and 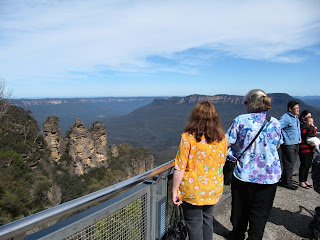 what we hoped would happen to our favourite couple in the final installment of the Earth’s Children series. Some argued in favour of death and closure while others contemplated villains and offspring. We probably sounded rather crazy to anyone passing by but we didn’t care – we were three literary -girls exploring the great unknown.

After a brief break, we continued up the road to Echo Point and its breathtaking views of the Blue Mountains. From our vantage point we could see the Three Sisters, the Ruined Castle, and the Jamison Valley below. 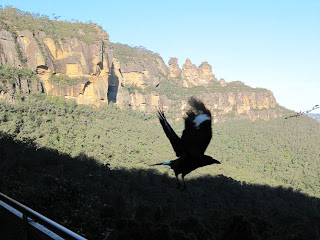 outcropping that made up the Ruined Castle was a natural formation. I mused silently that early settlers must have thought they had seen a strange oasis in the distance the first time they happened upon the sight before me. Perhaps they thought they had found the first Aboriginal Knights Templar only to be disappointed to discover rocks instead of tapestries.

Despite my documented fascination with castles, my favourite part of the view was definitely the Three Sisters. Known (highest to lowest) as Meehni, Wimlah, and Gunnedoo, the Sisters are accessible via a trail that leads to a small bridge that, from our vantage point, appeared to connect visitors to all three sandstone outcroppings. Known as the Giant Staircase, the track runs all the way into the Jamison Valley below and is reputably a lovely walk. 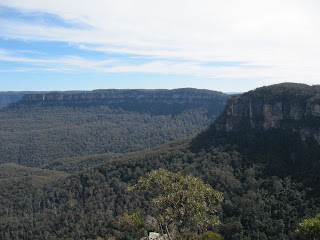 An important section of Auel’s The Plains of Passage takes place at a location known as the Camp of the Three Sisters, so naturally I insisted on countless photos of Minnow and LoJo with the Sisters in the background. Although we never spotted any of the S’Armunai, it was not due to any lack of diligence on my part. (Nor, I’m certain, was it due to the fact that the S’Armunai lived in modern day Czech Republic and not New South Wales, Australia.)

In true democratic style, we voted to forego a walk into the valley and instead headed to lunch at one of the nearby cafés where I ate a traditional Aussie Pie with my hands but without tomato sauce. Our day was only half over and we still had a descent into the valley, a bronze-age horse ride, and a flight over the canopy ahead of us. In fact, I would go so far as to say we had a Scenic World to look forward to.
Posted by MsTypo at 1:52 PM

The country looks absolutely amazingly awesome.
What is that bird flying away--or was it one of the "Earth's Children?
merthyrmum

merthyrmum, I'm pretty sure the bird is a Currawong. I'm surprised Typ0 didn't post a photo of the colourful parrots that were everywhere.

I'm pretty sure I've said this before but it's so true! I love your blog because I'll never be able to travel around as much as you do (lack of $$$ is a major factor in that!) so I enjoy living vicariously through you.

That's the only country I've every really wanted to visit. Mainly to see how they trained their harness horses. I still havn't seen all of the US..but working at it. I'll have to be content to follow you around.

I love that photo of the bird and shadow - fascinating! Fabulous!

Oh, I love mountain waterfalls! Also, I had Celine Dion in my head all day Sunday, thanks to you! Australia & New Zealand are on my list . . . someday.