Shut-up and Drink Your Moscato 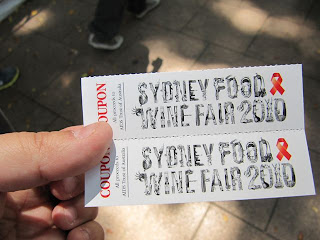 I’m a fat girl and I like food. I won’t apologize for either of those things. There is little in this world as tasty as a box of Kraft Dinner and from time to time life requires a Big Mac combo. I love a good salad as much as the next girl and a pint of Greek yoghurt may well be the best way to end a long day. Don’t get me started on the joys to be found in a chocolate éclair or the many ways a perfectly made sandwich can be a finer meal than anything created by Alain Ducasse.
It should come as no surprise to anyone that when the Crave Sydney International Food Festival began in October, one of the events I was most looking forward to was the Food and Wine Fair. Scheduled as one of the final events of the Festival, the tasting took over Hyde Park where the almost 70 vendors set up their booths for the big day. I made sure to arrive at the park well before the noon start time so I could get a feel for the lay of the foodie land and plan my eating appropriately.

Tickets, it should be noted, were not inexpensive at $19 for five. A glass of wine generally cost two, a pastry was one, and a small plate of food three. I even saw some vendors charge as much as four tickets per sample. Needless to say, I spent slightly more than I planned that afternoon but since all the proceeds from the event went to the AIDS Trust of Australia, it was hard to complain.

Within five minutes of having my first band of tickets and free Sydney Morning Herald bag in my hands, I purchased my first glass of wine. It had been my intention to kick off my afternoon with a glass of bubbly, but the woman at the Beelgara Estate booth convinced me to try their Moscato instead, and it was so good I have actually consumed several bottles in the weeks since.

Now armed with a glass of wine, I veered to the left and braced myself for the onslaught of humanity that stood between me and my lunch. Some of the top restaurants in the city were present and determined to make me spend more on tickets than my budget allowed. I did some initial recon and convinced myself to walk away from the Icebergs’ table with their Belvedere vodka and grapefruit drink. Guillaume at Bennelong had crepes plated to look like the Opera House but despite my well-documented obsession with that building, I walked away. 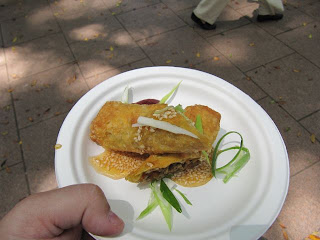 After doubling back, I noticed a large line in front of the booth for the Hungry Duck Restaurant. Normally, I would purposely avoid anything that looked so popular but when I spied Duck Springrolls in one happy customer’s hands, I lined up to part with another two tickets. “Oh my God these are so good!” I gushed aloud upon popping the first bite into my mouth. The contrast of flavours was a revelation of yumminess, and if I hadn’t been determined to try as many different things as possible I would have gladly eaten spring rolls for the rest of the day.

I chatted with people at many of the booths and found them to be universally helpful and well informed. From the volunteers to the chefs, it honestly appeared that the people working at the Food and Wine Fair were having a good time and their positive attitudes were contagious. Whether from the inexpensive wine, the good food, the great weather, or the profusion of goodwill from raising so much money for a great cause, everyone in Hyde Park seemed to be having a brilliant time. 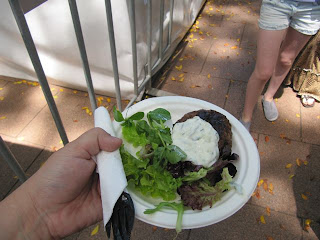 Caught up in the general good spirits of the day, I headed over to the Hudson Meats booth to try their Moroccan Lamb Burger with Green Salad and Tzatziki for three tickets. Although tasty, my advice to future vendors at events like these would be to avoid dishes that require knives and forks because the style of the day simply does not lend itself to standing in a crowded corner and cutting into a lamb burger while balancing a glass of wine, a camera, a purse, and a free swag bag. While not as outstanding as my earlier springroll, the flavours of the lamb and tzatziki complimented each other nicely.

I soon found myself dreadfully parched so my next stop was the Tempus Two table for a glass of their well-advertized Moscato. The wine, I was told, normally sells for $20 a bottle, so my two ticket sample seemed like a good deal. As refreshing as the wine was, I would definitely have bought one of their awesome t-shirts had they been for sale. 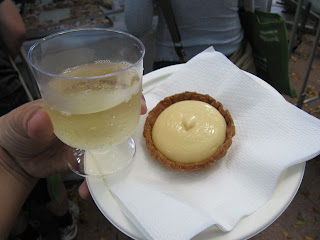 Foodgasam isn’t a word one should throw around willy-nilly but it is definitely one I uttered when I tasted the sublime lemon tart from Bourke Street Bakery. In fact, I think several passers by thought I was having my very own personal Meg Ryan moment when they overheard me moan in ecstasy over the pastry perfection of that tart. I had to force myself not to go back and spend the rest of my tickets buying up their supply of lemony goodness. 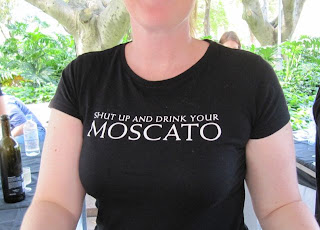 The heat of the day was really starting to affect me so I made my way over to the De Bortoli Wines table for a glass of sparkling wine. I was told the wine I sampled was the drier of their two sparkling selections, which only made me glad I didn’t have the other one as I found it to be rather cloyingly sweet for my tastes.

By two o’clock, at least two tables I walked past had run out of food and closed up shop. The Delicious Magazine table had even reduced the price on their food goody bag from four tickets to a much more affordable three. Packed with a bag of pink salt, cooking chocolate, Bertolli pasta and sauce, an apron, and several other items, the bag was a good way to bring a piece of the fair home with me and even provided me dinner for a few nights.

Sipping fine wine, nibbling on great food, and walking through Hyde Park is a pretty good way to spend a Saturday afternoon, in my opinion. I would be tempted to tell you more but I have another bottle of Moscato begging for some attention and I must obey the shirt.
Posted by MsTypo at 12:42 AM

I made the dreadful mistake of reading this post before making breakfast. Now a banana and a sandwich doesn't sound nearly as encitcing as moscato and loads of fine foods. Hmmm. ;)

I would love to go to a food and wine festival, they look like so much fun. And that grab bag sounded lovely!

Beelgara Moscato with lots of lemony tarts--a perfect meal! Did you go and visit the Hungry Duck later for more Spring rolls? They sound yummy.
merthyrmum