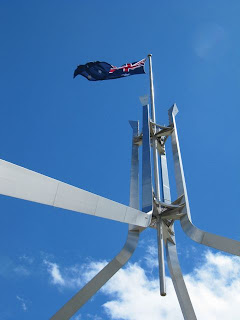 My time in Sydney was quickly coming to an end when LoJo reminded me we had one last adventure to embark upon. There was one place we hadn’t yet hit on our tour of Australia: the capital. So at some ungodly hour of the morning on a brisk Sunday early in November LoJo, Minnow, and I piled into Bluebird (LoJo’s new Toyota) and headed for the Australian Capital Territory.

I have visited many national capitals over the years from my own chilly Ottawa and its American counterpart Washington, DC, to Paris, London, and Vienna, but they are all drastically different from the thoroughly modern city of Canberra. A planned city with a current population of 345,000, the first thing that struck me was how incredibly green it was – there were trees everywhere and the way it appeared the buildings were fit around them rather than the other way around. 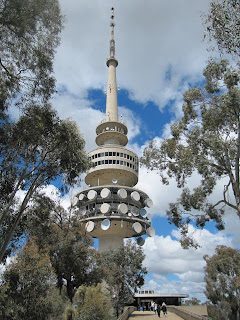 After a brief delay that had nothing to do with getting lost, we made our way to the Black Mountain’s Telstra Tower and its breathtaking views of the city in the valley below us. The windy observation deck was the perfect spot to take in the beauty of Canberra. The 195 meter high tower serves a practical purpose as a telecommunications tower in addition to a tourist stop and is home to both a revolving restaurant and a lovely café that makes tasty milkshakes.

The city gets its fair share of grief for being boring and antiseptic but there is no denying the peacefulness that lies within its carefully designed borders: from the perfect line from the War Memorial, down the ANZAC Parade, across the river, to the Old Parliament House, and then up the hill to the creatively named New Parliament House with its distinctive flag tower. Even the embassies and high commissions seemed to follow a particular set of laws that I haven’t noticed in other capitals. I realize Canberra is a young city but the embassy groupings seem to actually have been thought out rather than merely popping up when land became available. 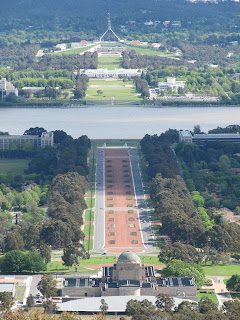 After a quick lunch, we piled back into the car and headed to where all the magic happens: parliament. The new parliament building was conceived when the old one became too small to house the needs of a rapidly growing country. Construction on the modern edifice was completed in 1988 and is truly a unique building in my opinion.

From Parliament Hill in Ottawa to Capitol Hill in DC, most government buildings I’ve visited are old and reek of the ghosts that haunt their halls. Canberra’s Parliament House, on the other hand, is brand spanking new and feels it. In direct contrast to how I feel about the rest of Australia, Parliament House is a cold, uninviting building from the moment you walk into its cool marbled entry hall. That is not to say it isn’t beautiful and architecturally interesting – it’s that and more. It is perhaps more a reflection of my preference for buildings that tell stories and breathe their history.

The moment we stepped inside the Pepto-Bismol pink Senate, to the right of the entrance hall I was cast back in time to high school when I participated in the Forum for Young Canadians program up in Ottawa. It was there I first really started to entertain the idea of becoming a politician and reforming the world (or at least Canada) in my own image. 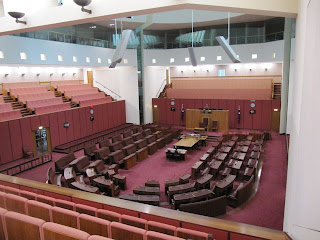 Sadly, I was unable to get down to the floor of the House in Canberra as I did all those years ago in Ottawa, but by the time we walked across the building to the green House of Representatives, I was well into reforming my plans for world domination as World Dictator Typo. The Lower House’s familiar arrangement made me envy the kids that worked there as Pages when Parliament was in session. It is, after all, easier to get people to hire you as World Leader when you have some experience on your resume.

The highlight of the new Parliament building isn’t on the floors of power but upstairs on the roof. From there, you can see the beautiful city of Canberra was laid out at the feet of Parliament in exactly the manner of how its city planners, Walter Burley Griffin and his wife Marion Mahony Griffin, intended. The centerpiece of the roof is situated above the beautiful glass pyramid. The huge Australian flag atop the unique 81-meter high steel flagpole can be seen waving in the wind for miles throughout Canberra. Perhaps, I thought as LoJo, Minnow, and I wandered around the roof, a new modern building is appropriate for this very young, modern country. 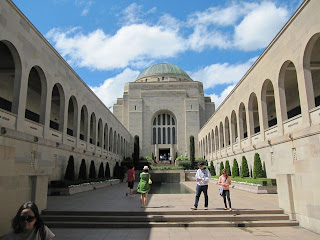 I amused myself counting how many items had been monogrammed with Australia’s coat of arms as we made our way back to the car. From there, we drove along ANZAC Parade to the Australian War Memorial where the country’s contribution to the last several wars was on display. I explained the significance of the paper cranes in the Hiroshima/Nagasaki display and Minnow told me about the contribution her husband’s ancestor had made toward the war effort in Gallipoli.

Our final stop was Mount Ainslie for a final bird’s eye view of the city. The fountain in Lake Burley Griffin cast water into the air as cars drove past Old Parliament House, and people made their way into the city’s quiet business district. With the capital at my feet, it suddenly dawned on me that my Australian adventure was almost over.

We had a three-hour drive (or in my case nap) ahead of us before we had to once again part ways. I’m not sure when I will return to Australia but I know when I do who I’ll call. I ran away from home only to land safely in the arms of friends on the other side of the planet. Thanks, ladies.
Posted by MsTypo at 12:30 AM

That looks like a beautiful city! There's nothing wrong with a planned, peacefully laid-out city. I lived in planned city (from the '60's) in Maryland and the organization really made things pleasant.

Typ0, seeing my country from your eyes is something to behold. I just regret that your time here was over so soon. btw, we didn't get lost, we just didn't know where we were for a few minutes ;). They put that silly lake right in our way!

Now that's a city I'd love to visit! Thanks for taking us along with you Typo.

Looks like a day well spent.
Something tells me you will be back in Australia in the future--and probably not too distant either.
And you did have a reason for running away from home ...Didn't you?
merthyrmum