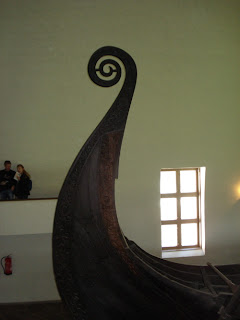 Maybe I’m weird, but as soon as I heard we were headed for Norway, I had only one thing on my mind: Vikings! Perhaps I spent too many hours re-reading “Curse of Viking Grave” as a kid but I find the idea of these ancient conquerors to be incredibly intoxicating. (If we were to be completely honest, it’s possible I also read too many romance novels with brawny Vikings willing to travel to Valhalla and back for the love of one perfectly lovely, if bookish, maid.)

Sadly, there were no actual Vikings waiting to ravish me when we arrived at the Viking Museum, but there were some really cool boats and other assorted relics. I found the carvings particularly interesting as they are very similar to those attributed to the Celts. Cross-cultural identifiers like this always intrigue me. 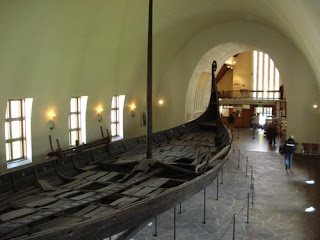 A Navy brat by birth, Hubby was quite taken with the ships, pointing out all the key details to me as we walked around the large exhibits. “Look at those oar holes! Do you really think they’d mount the rudder there?”

Our next stop was the Kon-Tiki Museum about a half-mile away. I hadn’t been terribly keen to visit this museum since it didn’t hold the promise of sexy Norse gods but quickly found myself as excited as everyone else wandering the exhibits. The first Kon-Tiki expedition in 1947 was mounted by a group of men who wanted to show it was possible to possibly to sail from South America to the Pacific Islands using only materials that would have been available to the local peoples in pre-Columbian times. Their ship was built of 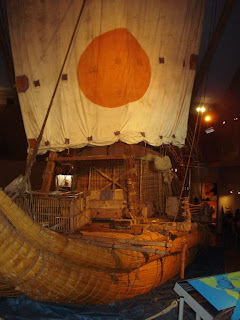 natural materials like balsa wood and hemp ropes, and honestly doesn’t look like it would have survived a cross of Lake Ontario let alone the Pacific.

(The boat to the left is not from original voyage. My photos of that boat did not turn out that well. This is from a subsequent expedition. Check out the links above for photos of the first boat. It's really cool!)

Hubby was quite taken with the expedition boats on display and we even stayed to watch part of the Oscar winning documentary made about the voyage. If it wasn’t for my well-documented inability to sail in rough waters without dying, I think Hubby would have had us building a boat and heading out into open water before the sun went down.

Between the art galleries, museums, and natural beauty in Norway, Hubby and I were never at a loss during our time in Oslo for things to do. And I haven’t even told you about my transportation obsession yet!
Posted by MsTypo at 10:57 PM

How fun Norway!It looks like a very exciting trip, I like all the pictures and tour that you gave:)It must be an awesome museum to visit. I blogged today about the chemical peel, my face is turning more red in my forehead and slightly itchy, but I explain the process in the most current post:) Keep having fun and keep us posted:)

Kon-Tiki is a fabulous book -- I highly recommend it! How cool that you got to see the original boat!

I love Viking boats - so cool! And great that you got to see the Kon-tiki boat too.

I can only agree and say that Norway is a great country!

I have my Viking at home:) Are you going to Denmark as well?

Very cool! We enjoy going to the solar boat museum in Giza. It's amazing that such a small museum, with basically ONE main item on display, is so fascinating, but close up viewing of these old boats really bring home the physical reality of our ancient past.

I read Kon Tiki when I was 10-11yo and remember liking it very much... I hardly remember it though. Probably should reread it sometime. I never knew there was a museum!

What a wonderful recollection of your Norwegian stay.;)
I would love to see the Kon-Tiki museum. The visions of Thor Heyerdahl have always intrigued me.;)
My parents own a time share in a resort on Canary Island that is designed partly by him.;))

I'm not sure if we will make it to Norway before we leave, but it seems beautiful! Expensive though, right?

I so want to go to Norway one of these days and see the fjords.

I love going to the museums in different cities and countries; so enlightening about the heritage and culture.

Great trip you gave us; thanks!

LOVE the boats!
We never got into the Solar Boat museum in Giza, Connie, but the pictures of it in the tour books don't look much different from the Kontiki!
I know my Dad was fascinated by the 1947 trip--we had the original book! I'll ask my sister if she still has it.
merthyrmum

Those boats look awesome!
And yeah, not many Vikings left ;)
We've been to a Viking park once, that was somewhere close to Oslo. Pretty fascinating. But my Ex has all the pics, gggrrr....

Looks so foreign to me. But interesting.

I love that boat. I need a helmet with horns now.

Of course, stuffed animals are allowed at the Pond Puppy Ball! As long as they are well-loved, of course. :)

Thanks for taking me to all those fascinating places via your blog :)

I love Viking myths...I can't wait till we tackle that part of history next year with Katie. And when I was in college...Heyerdahl was the topic of much discussion in several of my Anthropology classes.

Wow- beautiful craftmanship on the boats. My husband would love to travel with you all!

We just returned from Disney and that exact ship in the Viking Museum is in the film in the Norway boat ride--"Maelstrom"!
Glad to see that it really exists and is not just a part of a Disney movie...haha!